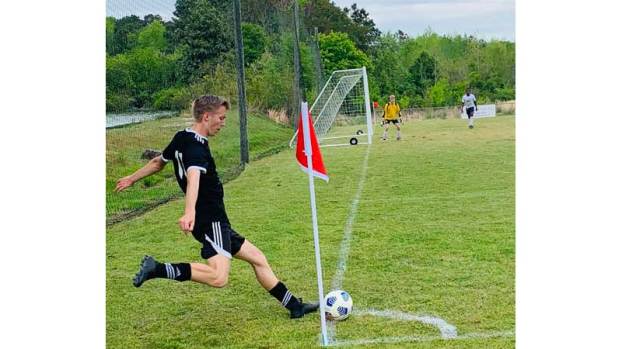 The Rock Church School Lions soccer team recently moved to 7-0 on the season. The squad played on its home field against Richmond Christian School and Williamsburg Christian Academy and won both games.

Rock Church scored all four goals in the first half.

Richmond Christian would not give up easily, though, scoring two goals in the second half, both coming from forwards Caleb Egland.

The goalie for Rock Church School, Adam Deaton, did his best to keep Richmond Christian off his team’s net by saving six shots on goal.

“Richmond Christian is an elite soccer program, and we played exceptional in the first half to secure the win,” Rock Lions Coach Danny Dillon said. “Any time you get a win from one of these big private schools, it’s a big deal.”

Williamsburg Christian did what it could, but it, too, was no match for the Rock Lions.

The Lions were strong in both the first and second halves, scoring five goals per half. Fanjul and Seth Woodward each scored three goals, achieving hat tricks. Jack Dillon, Cole Butler, Adin Brown and Deaton all scored one goal each in the second half. Deaton also stopped five shots on goal. The final score was 10-3.

“We have an incredible team at Rock, and we are improving every day,” Coach Dillon said. “I love to see good soccer, and that’s what we are playing. With our passes, shots, unselfishness, this team is the whole package. However, our goal is not to win games but to win souls through our play. These kids love Jesus.”

The Rock Lions continue their season as they will play powerhouse Southampton Academy, Isle of Wight Academy and Richmond Christian for a second time.

By James J. Lidington Isle of Wight Academy ISLE OF WIGHT Christian Biernot’s RBI bunt with one out in the... read more