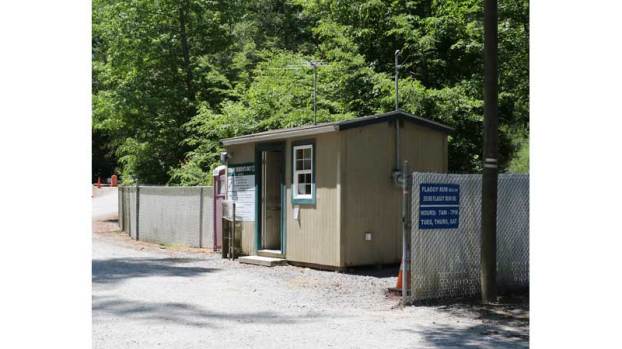 Pictured is the entrance to the Flaggy Run trash site and the attendant’s building. Several supervisors credited the attendants with significantly reducing the trash volume and improving the state of the sites. (Photo by Titus Mohler/The Tidewater News)

The May 17 public hearing with regard to Southampton County’s fiscal year 2021-22 budget brought a variety of subjects to light, including, but not limited to, the solid waste management fee, the relationship between the county’s Board of Supervisors and its school board, exempting taxes for logging equipment, consideration for the Western Tidewater Free Clinic and the benefits of the Blackwater Regional Library.

The most prominent subject of the meeting, which featured in-person participation, was the solid waste fee that remains at $200 in the proposed FY 2021-22 budget.

County Treasurer Cynthia Edwards, who has called to do away with the fee repeatedly in recent board meetings, led off the discussion of the topic May 17.

She noted that it was back in 2012 when the fee was first put into place, and she cited supervisor comments made in a May 2012 meeting that if the county’s tipping fee goes down, the solid waste fee would come down in a like percentage.

Edwards said she posed this question previously to County Administrator Michael Johnson, and she said he replied that the savings went to build the reserve back up. She said she has checked the records, and savings was not put into the reserve every year that the tipping fee went down.

“It’s time to do the right thing, and one of the most important things you have, even if you don’t have a dime to your name, is your trust and integrity,” she said.

At the conclusion of her initial comments, Edwards drew some applause from people in attendance.

Edward Artis, of Newsoms, spoke after Edwards, saying that he wanted to echo her sentiment.

“We have an old saying that says, ‘An unwise spender and his money don’t stay together very long,’” he said, “and I’m here tonight to try to make a wise decision about my money and ask this board to help me with that in the removing of this $200 fee.

“I think the facts have been very well laid out by Ms. Edwards,” he continued. “I’d like to applaud her for taking the mantle and leading the charge.”

With all of the savings, taxes and reduction in other fees, Artis said he was humbly asking the board to consider removing the fee.

“Can somebody, anybody, tell us what you’re going to do?” he said.

Capron District Supervisor and Board Vice Chair William Hart Gillette said he has met with Edwards multiple times and is still meeting with her to study the budget, trying to find where, if at all, the county can do away with the $200 trash fee.

“There are not many options that we have,” he said.

He mentioned there are more people that he has talked to that do not want to do away with the fee than do, but he emphasized he is looking for ways to eliminate it.

“I can assure you that I am going to continue to meet with (Edwards) to explore opportunities, should they arise,” he said. “I can’t make any promises. I didn’t make any to any citizen when I was running to do away with this or do away with that but to try to manage the finances well in the county, the budget, and we’ll continue to do that.”

Artis said he thinks the problem for most people with regard to the solid waste fee comes back to the integrity issue.

“It has been stated and printed that when the tipping fees came down that the fee would be reduced or eliminated,” he said. “No clear definition or explanation as to why it hasn’t has been given, and I think it goes back to a large part of integrity.”

Artis said he also spoke for his wife, Retina Artis, who was also present at the meeting.

During comments made by John Burchett, of Sebrell, he praised Edwards and also advocated getting rid of the fee.

“Cynthia Edwards is amazing. She’s holding your guys’ feet to the fire, and I love it,” he said. “You guys cut the budget on the courthouse from up to $31 million down to $20 million, and you can’t figure this out? Come on, give me a break.”

Edwards later returned to the podium, suggesting ways the county could save money to help eliminate the fee. One of her suggestions, keying off of a Burchett comment, included questioning the efficacy and need of some trash site attendants, who she said often are watching TV and not coming out of the on-site building to interact with people dropping off trash.

Multiple supervisors defended the effectiveness of the attendants.

Franklin District Supervisor Robert White noted that if the county does away with the solid waste fee, it would have to raise personal property taxes significantly.

“I know the tipping fees have gone down, but we’ve studied this thing from one end to the other,” he said. “Everything else has gone up — transportation, the trucking part of it, running these dumpster trucks. You’ve got to pay people more to work. … I don’t like the $200, but it’s the most fair way to do it to where everybody that produces trash in the county has got to pay their part.”

In his comments, Burchett also spoke to the relationship between the Southampton County School Board and the Board of Supervisors.

“If we have conflict between our two leading groups, our children are going to be the ones that suffer,” he said. “We need to get this fixed.”

He encouraged county leaders to get together with Southampton County Public Schools Superintendent Dr. Gwendolyn Shannon to resolve whatever rift may exist.

Jerusalem District Supervisor and Board Chair Dr. Alan Edwards said he would love to have a very good relationship with the school board.

“This Board (of Supervisors) is very pro-educational,” he said. “Everybody on here is pro-education, but you have to have somebody on the other side respond, OK?”

Gesturing to school board member William Worsham, who spoke at the public hearing, Alan Edwards said, “This man over here is the only one I’ve been able to talk to.

“We invited them in November to give us a rundown on the problems with the roof,” Edwards continued. “They didn’t have the courtesy to answer the letter we sent. This board is transparent. We’re not doing anything under the table, but if you have an idea of how we can establish a better relationship, then fine, we’re all for that.”

He later added, “We’re planning to give the schools everything we have, but we also need some input from the other side, and we have not gotten that. All they have to do is meet with us, answer some questions, share the problems with us, and we can help.”

“We want to help them,” White added.

Berlin/Ivor District Supervisor Christopher Cornwell Sr. also made a point later in the meeting to say the school system has a seat at the table that it is welcome to take.

At the beginning of the public hearing, Worsham spoke on the Blackwater Regional Library.

“What you have done in appropriating monies for the Blackwater Regional Library is give people an opportunity to get outside the house and do some things they otherwise couldn’t do,” he said.

He emphasized to the board that the appropriations it had made to the library represented money well spent.

Worsham also spoke briefly about broadband, encouraging the board, as a citizen, to hustle along the efforts to expand broadband to help students and others who have continuing cause to work remotely.

Ron Jenkins, executive director of the Virginia Loggers Association, represented Southampton County loggers with his comments. He acknowledged the board’s decision not to approve a tax exemption for logging equipment and said he understood.

“However, we also thought this would be a great opportunity to come back and at least explore some more information about this particular, unique business that you may or may not know these things about,” he said, “and that way we just add to your information, and when we have the opportunity, perhaps you will reconsider our request to fully exempt the personal property and the machinery and tool taxes on forest harvesting equipment.”

Bob Hayes, who is on the board of directors for the Western Tidewater Free Clinic, thanked the Board of Supervisors for its support and for its consideration in its 2021-22 budget. He provided a summary of what the clinic is doing and what it did in 2020, noting that the clinic suffered through the pandemic but kept its doors open the whole time, serving people in the area.

Dr. Edwards praised the clinic for its service to the citizens in the county.

“I want to ask you for your consideration when you’re doing the budget,” Hayes said. “Keep us in mind, and we’ve requested $31,830, but we’ll take whatever you have to give.”

A pursuit by the Southampton County Sheriff’s Office ended in a crash and a slew of charges for a suspect... read more