COURTLAND – Charles Ferguson Fuller Sr., 80, passed away May 17, 2021 in his home with family by his side. Born in Newsoms, he was a son of the late James Richardson Fuller and Louise Ferguson Fuller. He was also predeceased by his first wife, Patricia Anne Fuller and his son, Charles F. “Chucky” Fuller Jr. 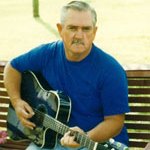 Charles was a farmer and was a retired corrections officer for Deerfield Correctional Center. He was a member of Handsom Hunt Club and Sunbeam Baptist Church. Charles loved music, playing his guitar and fishing.

A graveside service will be held at 11 a.m. on Thursday, May 20 at Mt. Horeb Cemetery with Pastor Hoyle Green officiating. The family will receive friends at the residence after the service and suggests that memorial donations be made to Sunbeam Baptist Church.