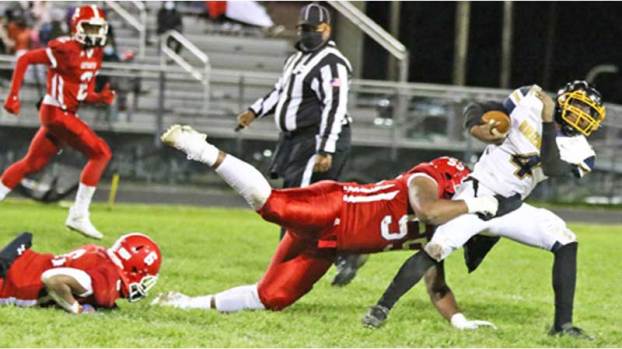 Southampton High School junior Javen Johnson, No. 55, grabs hold of the Franklin High School ball carrier during a game this spring. Johnson was named to the Spring 2021 All-Region 3A First Team for football as both a defensive and offensive lineman. (Photo submitted by Travis Parker)

Southampton High School’s varsity football team drew seven selections among the Spring 2021 All-Region 3A honorees, led by junior Javen Johnson, who made the first team as both an offensive and defensive lineman.

He noted that in terms of enrollment, Southampton is one of the smallest schools in Region 3A, with around 790 students. Meanwhile, some other region members have almost 1,100 to draw from for their football teams.

“Our kids are in some really talented company when it comes to the all-region, so there are a couple that I feel as though were deserving as well that didn’t quite make the votes,” he said. “However, I am thankful and grateful for the ones that were able to be recognized.”

Johnson, who stands at 6 feet, 3 inches tall and weighs 290 pounds, logged his third season with varsity experience this spring.

“He’s doing all the right things to position himself to be able to play at the next level, which is his ambition,” Parker said, praising Johnson’s academic performance, his coachable character and his willingness to sacrifice for the team. “He did a very, very good job on both sides of the ball, and he’d be the first to tell you that it’s his teammates that really helped him be able to get this first-team selection.”

Parker mentioned that each play in which the Indians went to Johnson’s side on offense, Johnson did his job all the way around.

The coach took a moment to highlight Johnson’s defensive stats, his size, opposing coaches having been able to see him play this spring and his status as an all-region defensive player last season.

“All those things combined kind of put him in position to be considered first-team with a lot of the others in the region that are usually pretty much powerhouses, such as Lafayette, Phoebus, Hopewell, I.C. Norcom, just to name four schools of athletes and programs that he was being compared to,” Parker said.

“He had about 10 kick returns on the year and took one back for a touchdown,” Parker said. “So those stats there earned him the second-team honor as a kick return specialist. So he has a lot of promise, and we’re looking for him to be able to help us out not only on the special teams but offensively and defensively this coming year.”

Jefferies has multiple years of experience as a long snapper.

“He’s been very, very consistent with the long snapper position, and the type of stats that pretty much got him the second-team (selection) was out of a combination of extra-point, field-goal and punt snaps, all those combined, he had 25 opportunities, and 24 out of the 25 were pretty much perfect snaps in the game situation,” Parker said.

Clark, who was playing football on varsity for the first time this spring, improved Southampton’s performance at the punter position.

“He pretty much was voluntold for that position and did well for us at times,” Parker said. “He had some (kicks) that (were) kind of inconsistent at times. However, he still was able to get in there, and then the ones that he really did boom, his average ranked him and gave him enough to be able to get the second-team (honor) at the punter position with over a 30-yard average.”

He also stepped in at quarterback going into the season, and Parker said he and his staff are excited about Clark’s potential going into next season.

The coach noted that Ivey and Joyner were two-way starters who were definitely deserving of honorable mention at the regional level. Ivey was a defensive lineman and tight end, and Joyner was a wide receiver and cornerback.

Broncos boys tennis wins on the road versus Dragons

Franklin High School’s boys tennis team was victorious April 29 in its first match since the arrival of the COVID-19... read more