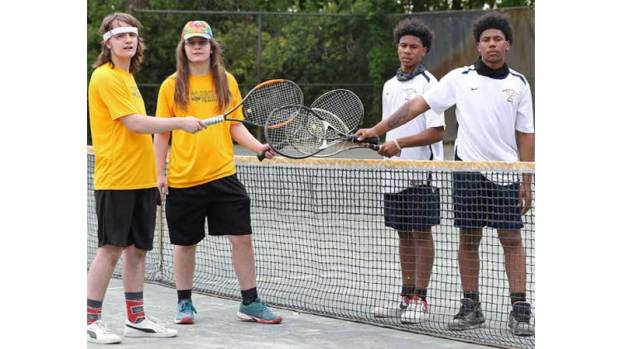 Because of restrictions due to the COVID-19 pandemic, no hand shaking was allowed at the April 29 match, so the Appomattox Regional Governor’s School and Franklin High School boys tennis teams touched racquets at the end. Pictured are, from left, ARGS’ No. 1 doubles Ellis and Knox Butler and Franklin’s No. 1 doubles Xavion and Xavier Perry, two sets of brothers who live in Franklin. (Submitted by Frank A. Davis)

Broncos boys tennis wins on the road versus Dragons

Franklin High School’s boys tennis team was victorious April 29 in its first match since the arrival of the COVID-19 pandemic.

On March 23, 2020, the Virginia High School League (VHSL) canceled all spring sports for the state of Virginia due to the novel coronavirus. The Franklin boys tennis team was just days from its first match of the season.

It was not until December 2020 that the VHSL, under very strict restrictions, allowed athletics to resume. After winter sports were pushed back, spring sports were also pushed back, beginning practices April 12.

On April 29, the Franklin boys played their first match of the season at the Petersburg Country Club against Appomattox Regional Governor’s School. It was a very unique experience for the Bronco team because this was its first match on clay courts.

After all matches for singles ended, the score was tied, 3-3.

Jahmajae Bynum, the No. 1 player for Franklin, lost his singles match to Knox Butler with a score of 8-4.

The match of the day was one that doesn’t happen often. Both teams had two brothers playing at the No. 1 doubles position, and both teams of brothers live in Franklin.

The match started off game-for-game, but as the match continued, the Franklin team of identical twin brothers moved ahead and claimed an 8-2 win.

It was a good day of tennis as the Broncos edged ahead to win the match against the Dragons with a score of 6-3.