SAVANNAH, Georgia – James Nelson “The Old Bear” Eller Jr., 84, passed from this life on Saturday, April 24, 2021 in Savannah, Georgia due to complications from surgery. Born in Welch, West Virginia on Feb. 1, 1937, he was a son of the late James Nelson Eller Sr. and Margaret Hagy Eller. 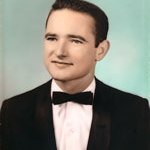 He attended Welch public schools until his father’s work led the family to Hampton, Virginia, where he finished out his secondary education as a Hampton High School Crabber in 1955. Matriculating to Virginia Polytechnical Institute, he was a member of the Corp. of Cadets and graduated with a degree in mechanical engineering in 1959. His first job, in Pittsburgh, introduced him to his future wife, Darla Ann Smith, who he married on June 25, 1960. Nelson completed an MBA at the University of Pittsburgh in 1963.

Work eventually took him south to Franklin, where he joined Union Camp Corporation. His business ventures led him to form his own construction company, Bear Contracting Inc. Bear Contracting was active in the Tidewater region, with projects ranging from Maryland to Florida. More importantly, Nelson was recognized by those working for him, as a man who was genuinely concerned with their well-being.

He was a loving husband to his wife, Darla; a devoted father to his sons, Scott (Andrea) of Tulsa, Oklahoma and Wade (Lois) of Midlothian, Virginia. He is forever the mischievous and fun-loving grandad to Colby Eller, Claire Eller and Joshua (Sallie) Sells. He took joy in the antics of his two great-grandchildren. He is also survived by many beloved nieces and nephews. Nelson was preceded in death by his parents and a sister, Elizabeth Eller Underwood.

In 1988, he and Darla relocated to Savannah. Here, he spent the remaining years of his career working with Union Camp Corporate Engineering and ultimately, enjoyed many years in retirement with Darla. Never idle, Nelson enjoyed boating, riding motorcycles and tinkering with classic cars. His most recent hobby was teaching himself to make unique walking canes.

A funeral service will be held at 11 a.m. on Saturday, May 1 in Wright Funeral Home with the Rev. Lou Ventura officiating. Burial will be at 2 p.m. in Parklawn Memorial Park in Hampton. The family will receive friends one hour prior to the service in the funeral home.