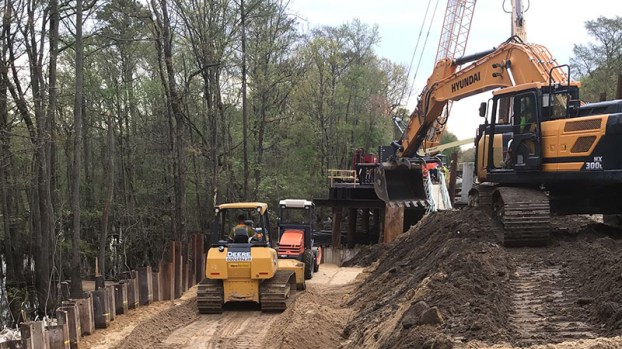 VIRGINIA DEPARTMENT OF TRANSPORTATION Crowder Construction Company crews are also placing fills on the west side of the overflow bridge for the widening of the new approaches.

More than three months have passed since work began on the Route 671 Bridge Replacement Project in Southampton County, and efforts with regard to the first of two bridges are on schedule to meet an estimated completion date of Oct. 1.

In reference to work on the overflow bridge, Ullrich said all existing bridge elements have been removed minus the piers as they have been under water since work began.

“Removal of those piers begins this week,” she said April 9.

“Currently, Crowder Construction is focusing on installing the 36-inch concrete cylinder piles that will essentially be the two piers for the overflow bridge,” Ullrich said. “To date, they have installed two of four piles in pier 1 and one of four piles in pier 2, with piles delivered every 4-5 days. Crews are also placing fills on the west side of the overflow bridge for the widening of the new approaches. This step has been completed for the south side of the roadway and (crews) are now placing fills on the north side of the roadway.”

Ullrich stated the overflow bridge is estimated to be completed as early as Oct. 1 and is on schedule, though all work is dependent on weather conditions.

“The roadway and new bridge is estimated to be open for traffic from October 2021 to January 2022, and another detour will be in place as early as January 2022 through the fall of 2022 for the construction of the river bridge,” she said.

Grant funding has been approved that holds the potential of bringing notably improved living conditions to the Town of Newsoms.... read more