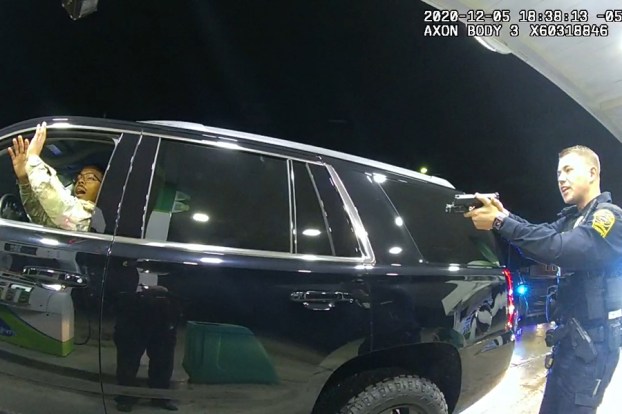 According to the suit, 2nd Lt. Caron Nazario, an Army Medical Corps officer of Latinx and African American descent, was in uniform driving his new Chevrolet Tahoe SUV west on U.S. Route 460 through town last December. He was near the town’s Food Lion when he saw a Windsor Police Department cruiser — driven by Officer Daniel Crocker — signal him to pull over.

The lawsuit contends Nazario signaled his compliance by activating his turn signal and continued driving below the posted 35 mph speed limit looking for a safe, well-lit place to stop. He found one less than a mile ahead: a BP gas station on the opposite side of the highway.

Per the incident report Crocker filed after the fact, which is included as an exhibit in the lawsuit, the stop had been in regards to a missing license plate and “dark tinted windows.” He characterizes Nazario’s actions as “eluding police” and deems it a “high risk” traffic stop, while acknowledging Nazario’s “low rate of speed” in the same report.

The suit, however, claims the vehicle had temporary cardboard license plates taped to the inside of the rear window of the vehicle “at the top and on the passenger side, visible from behind.”

Another officer, Joe Gutierrez, heard Crocker’s report to dispatchers and arrived at the BP shortly after Crocker did. The officers’ body camera footage shows both exiting their patrol cars with guns drawn.

A tense exchange follows, with the officers demanding that Nazario exit his vehicle. In a video of the incident Nazario recorded on his cell phone, he repeatedly asks the officers “What’s going on?” and receives responses of “Get out of the car now!”

That is, until one of them — identified in the lawsuit as Gutierrez — replies, “What’s going on? You’re fixin’ to ride the lightning, son.”

“This is a colloquial expression for an execution, originating from glib reference to execution by the electric chair,” the lawsuit states.

When Nazario says he’s “honestly afraid” to exit the vehicle, Gutierrez’s body cam records the officer replying, “Yeah, you should be.”

The exchange continues until Gutierrez, as shown on his body cam, tells Nazario “you’re under arrest … you’re being detained for obstruction of justice.” The officers then spray him with oleoresin capsicum, commonly known as pepper spray.

According to the department’s incident reports, when Crocker attempted to unlock and open the driver’s door, the driver hit the officer’s hand away, and still refused to exit the vehicle, at which time he was OC sprayed. The driver then reportedly stepped out of the vehicle, but refused to comply and lay on the ground, and a “short struggle” with the officers ensued.

“In an attempt to get the driver on the ground, the driver was actively resisting, Officer Gutierrez delivered knee strikes to try to gain compliance,” Crocker writes. “The driver went down on one knee, however would not lay flat.”

The suit, however, claims Nazario had his hands up and out of the vehicle the entire time and “at no time does Lt. Nazario touch or smack either Gutierrez or Crocker during this interaction.”

With Nazario in handcuffs, blinded by the OC spray and in custody, an emergency medical technician asked if Nazario had any firearms in the vehicle, to which he replied he did. Upon locating the weapon, Crocker ran Nazario’s identification through his patrol car’s computer system, which confirmed Nazario’s driver’s license and concealed carry permit were both valid. He then checked the gun’s serial number to see if it was stolen. It wasn’t.

“Gutierrez watched this unfold and failed to stop Crocker or intervene in this unlawful search, despite having reasonable opportunity to do so,” the suit states.

As Nazario’s vision begins to return, Gutierrez is heard on Crocker’s body cam acknowledging Nazario’s reasons for continuing to drive to the well-lit BP.

“I get it,” he says. “The media spewing race relations between law enforcement and minorities, I get it,” adding that it “happens all the time” and that “80% of the time, it is a minority.”

The incident concludes with Gutierrez saying to Nazario, “If you want to fight and argue … you have that right as a citizen, if that’s what you want, we’ll charge you … If you want to just chill, let this go, and no charges filed, we’ll take the handcuffs off, we’ll get you a bottle of water … and sit here until you feel comfortable driving.”

According to Crocker’s report, Nazario was told he could be charged with improper display of license plates, obstruction of justice with force, misdemeanor elude and assault on a law enforcement officer or avoid charges due to his being active-duty military.

“I did not want to see Nazario’s career be ruined by poor judgement (sic),” Crocker writes. “Nazario chose not be charged.”

The suit describes the body cam and cell phone footage as “behavior consistent with a disgusting nationwide trend of law enforcement officers, who believing they can operate with complete impunity, engage in unprofessional, discourteous, racially biased, dangerous and sometimes deadly abuses of authority.”

It further characterizes Crocker’s and Gutierrez’s after-the-fact incident reports as containing “near identical material misstatements of fact” that “ignores and intentionally omits material facts of the Defendant’s escalation, use of firearms, and the threats of murder within a minute of pulling Lt. Nazario over.”

The suit asks for $1 million in damages. Nazario’s lawyer, Jonathan M. Arthur of Thomas H. Roberts & Associates P.C., said no court date has been set yet.

The town’s website lists biographies for seven officers, including the chief, on Windsor’s Police Department, but officers Crocker and Gutierrez aren’t named.

Police Chief R.D. “Dan” Riddle, whom Gutierrez identifies in his body cam audio as having been on-scene at one point in an off-duty capacity, declined to comment on the “pending litigation.” Nor did he comment on the employment status of the two involved officers, when asked.

Windsor has scheduled a closed session for its April 13 Town Council meeting to discuss “Consultation with Legal Counsel,” according to the meeting’s agenda.