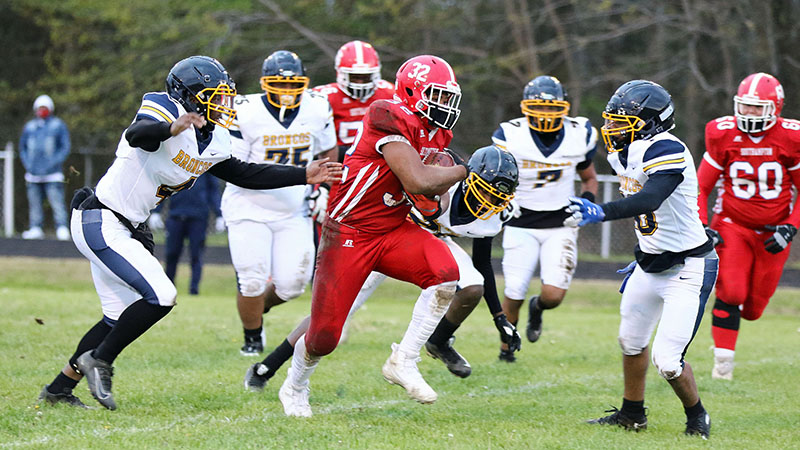 Even with everything past and present with the COVID-19 pandemic, no football season would be complete without the playing of the annual big game of the season, “The Backyard Brawl.”

Both Franklin and Southampton high schools’ staff met all requirements established by health officials to play the game safely on April 1 at Southampton High School.

Although the final score was 26-0 in favor of Southampton Indians, I believe that both teams were winners in just being able to play the game. For all past games, this game was always slam packed with spectators packed in the stands and standing all the way around the perimeter of the field. Because of the state of Virginia attendance requirements, both schools were limited in ticket sales.

The game opened with the Indians’ Jaeden Warren taking the opening kick-off 70 yards for a touchdown. The Indians scored again in the second quarter on a run by Willis Walton. The extra point was good to give the home team a 13-0 led which held to halftime. The Indians scored in the second half on interception by Jamond Council for an 85-yard td to push the score to 19-0. Willis Walton added the last points for the Indians on a 10-yard run. All successful extra points were kicked by Daniel Padilla.

Southampton Coach Travis Parker remarked after the game, “As always, our Southampton-Franklin student-athletes left it all on the football field. The level of competition that was displayed by both teams was phenomenal. We went into this game knowing that the Franklin Broncos would bring all they had to us. However, I am proud that the Big Red players rose to the challenge to get the win. The 26 points were not easy to come by, but our players continued to play hard and be resilient. Our defense did a great job by keeping a talented Bronco team from scoring and was able to also put 6 points on the scoreboard as a result of running back an interception for a touchdown. This season has been unpredictable, but our players have worked hard, and God has covered us by keeping COVID away from our team.”

The Broncos head coach Karl Robertson in his comments after the game stated, “our young men worked hard tonight. There was no quit in them. We just couldn’t stay ahead of the chains and costly penalties also played a big part in the result. However, I cannot be more proud of our efforts tonight and during the course of this awkward COVID-19 season. We adjusted on the fly and played the cards that we were dealt this year. Hats off to coach Travis Parker and his team on their victory tonight. And as in all things, we give God the glory for seeing us through it all.”