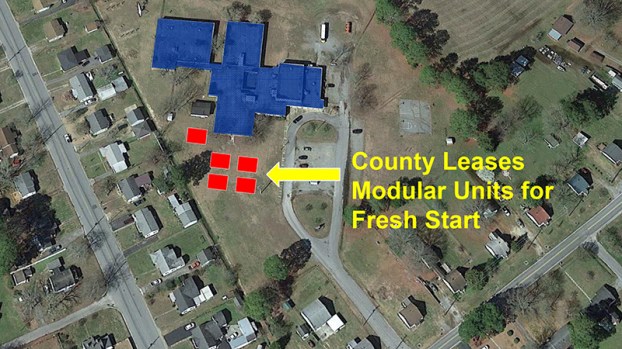 The county expects to break ground on the renovations this September. The lease would run from Aug. 1 this year through Jan. 31, 2023, when construction is projected to be complete.

Johnson entered negotiations with county’s School Board at the board’s March 8 meeting, offering the school system rent in the amount of $30,000 a month for 18 months, plus $300,000 to relocate the Fresh Start program to modular units and $14,950 for air conditioning, heating units and fire alarms — a total of $854,950. Since Franklin shares use of the Circuit Court, clerk’s office and Commonwealth’s Attorney with Southampton County, it will bear responsibility for a percentage of this cost.

Johnson said the city’s exact share will be determined once and if details are finalized.

Per the latest estimate from the county’s project architect, Glavé & Holmes, the courthouse renovation will cost roughly $20 million — $16 million for the construction work plus $1.76 million for planning and design and $2.3 million for temporary facilities, furnishings and equipment. The city of Franklin will be on the hook for just over 21% ($4.2 million) of that figure based on its population of 8,261 to the county’s 17,855 and the precise amount of square footage it will share with the county. The county will be responsible for the remaining $15.8 million.

The city is planning to couple $1.65 million in refinanced existing debt with $5.5 million in new money to pay for its share of the courthouse project plus other capital needs, which may necessitate a 5-cent real estate tax increase.

The city has offered the use of its courts building on Pretlow Street to house the county’s General District and Juvenile & Domestic Relations courts and their associated combined clerk’s office — so it can expect reimbursement from the county for the cost it incurs while hosting district court cases.

“The city will be tracking these costs and billing the county,” Johnson said.

The village of Drewryville hosted a community trash pickup day over the weekend, which drew more than 30 participants. The... read more