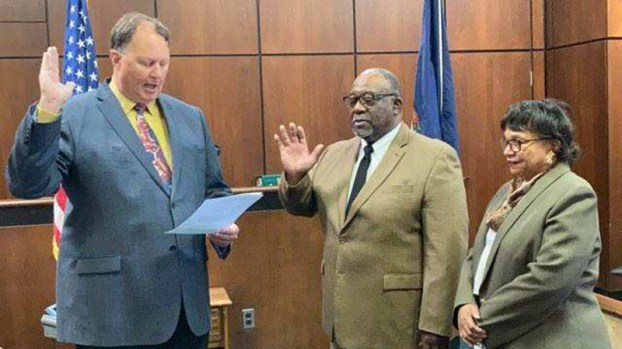 The town of Boykins has its first African American mayor.

Jackie M. Robertson won the town’s Feb. 9 special election to fill the remainder of the late Dr. Carolyn Modlin’s mayoral term, with 36 votes cast in his favor and none in opposition. He officially took office March 18 following a swearing-in ceremony at the Southampton County Courthouse.

Robertson has lived in the town for 35 years, and served 25 years with the Boykins Volunteer Fire Department. He’s now an honorary member and past president of the department.

He had already been serving as Boykins’ vice mayor when Modlin called him to inform him of her illness and asked him to take charge of the Town Council.

Modlin, 69, died Oct. 21, 2020, just five months into her first term as mayor. She too had made history in May of that year by becoming the first female mayor of Boykins. Modlin had also served on Southampton County’s School Board for several years, and at the time of her death, was still a sitting member.

“I feel it is my duty to try and carry out and complete the goals she had set for the town,” Robertson said. “I want to make her proud and serve the citizens of our little town to the very best of my ability.”

He and the other Town Council members have already tasked Town Clerk and Treasurer Victoria Edwards with heading up the effort to upgrade the town office’s technology, and plans are also underway to rebuild the town shop that burned last year shortly after Modlin was elected.

Since moving to Boykins from his native Courtland, he’s seen “many positive things” come to his adopted community. New families have relocated into town, bringing its estimated population from just over 500 as of the 2010 census to an estimated 748 as of 2019. The town’s Dollar General, which opened in 2009, has helped many residents who don’t have transportation and the elderly get supplies, he said.

“I have plans to involve the citizens as helpers to the Town Council,” Robertson said. “Citizens are now helping to distribute our town newsletter door to door in their respective neighborhoods. We are also planning improvements to our Police Department building.”

Check your emails for vaccine appointments

The Western Tidewater Health District has sent out nearly 10,000 invitations this week for access to the Vaccine Administration Management... read more