In addition to his wife Jane, he is surviv 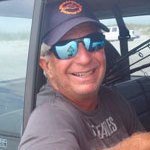 His lifelong best buddies, Sammy Purviance and Woody Griffin and numerous nieces and nephews, a host of good friends and extended family.

John’s enduring success as a man, husband, father, son, brother and friend stemmed from his humility, his kind and modest character, his strong work ethic, sense of fairness, good humor and his willingness and ability to change and grow with the times.

He was a lifelong Sussex and Southampton County farmer, first with his father and grandfather and later as a partner in Stephenson Farms with his brother, Joe for 43 years. John retired from farming in 2015. He was a member of Wakefield United Methodist Church and held several agricultural association positions during his career. He was a proud 1971 graduate of the University of Virginia with a bachelors degree in psychology and avid Cavaliers fan through and through. Go Hoos!

John considered one of the crowning achievements of his life to be the creation of the business, Sweet Corn of Wakefield with his wife Jane. In his mid-twenties, John would give away free produce at the railroad tracks and his passion blossomed into a small stand on the side of Route 460 in Wakefield as a family affair. Sweet Corn of Wakefield grew to become a regional institution sought out by folks from as far away as Washington, D.C. and many surrounding states. Around July 4 of each year, when their sweet corn crop matured, lines of cars would fill their lot with folks eagerly awaiting the day’s fresh-picked ears and the friendly fellowship of the Stephenson’s and their crew. The hundreds of ears picked and bagged by hand at dawn each day would sell out in an hour or two. With John’s passing this week, there will be an empty spot in our hearts and on our summer plates. The family sends heartfelt thank you to all the young men and women who worked at the stand over the years.

A private celebration of his life will be held by family at a later date. In lieu of flowers, the family kindly suggests memorial donations be made to Wakefield Volunteer Fire Department.