COURTLAND – Clifford Arlington “Cliffie” Hedgepeth III, 54, passed away March 20, 2021 in Southside Regional Medical Center in Petersburg. Cliffie was born in Germany and was a 1985 graduate of Franklin High School and was a graduate of Paul D. Camp Community College. He was an Army veteran and served in Desert Storm. Cliffie was an electronics technician at Norfolk Naval Shipyard in Portsmouth. 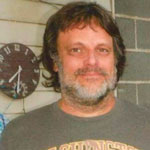 Cliffie loved the Beatles and loved his cats, especially Peanut and Kitty Z who predeceased him.

A graveside service with military honors will be held at 2 p.m. on Wednesday, March 24 in Cedar Hill Cemetery in Suffolk with Dr. Charles Qualls officiating. Memorial donations in memory of Cliffie may be made to your local VFW or CHKD. Wright Funeral Home, Franklin is in charge of arrangements.

The family will be at Cliffie’s and Windy’s residence at 22465 Shands Drive in Courtland.

The service will be livestreamed. To view the live stream click the link https://m.facebook.com/Wright-Funeral-Home-114251662075086/. You do not need to be a Facebook member to watch the live stream and live streams usually start 5 minutes prior to the service and will be saved for later viewing, Facebook permitting.