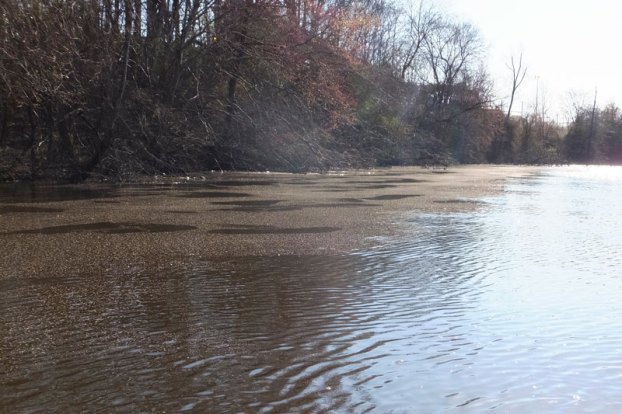 Sawdust coming from the mill and into the Blackwater River. Submitted | Jeff Turner

Back in the saddle

Spirit of Moonpie and I spent the 5th through the 7th on the Blackwater below Franklin. Spirit of Freezing Deer did not go because she hates being cold! The water was still a little high, a little cloudy and 49 degrees. Air temps ranged from 28 to 52 degrees. It was a pretty cold trip actually to these old bones.

I did not fish a whole lot as there was so much trash out there. I caught one shad, one bass and three chain pickerel. The chains are what I was after anyway as I need some to cook for a friend of mine that had never had any. So that was a success. I fished for stripers about 30 minutes, but had nary a hit. While I was downriver, I visited the eagles’ nest at Cherry Grove. There is a nest there, but I did not see anybody at home. I’m hoping there was a mommy eagle there and she was just hunkered down.

So, yeah, the trash was quite bad, I picked up two bags easily and a big piece of black plastic ditch pipe? I cleaned up from the bypass bridge downriver as that is where I was hanging. I did not pick up toward Franklin and its trash spewing canal that dumps into the river, maybe someone else will do it? Right. The only other water quality issue I saw was at the mill. Sooo much sawdust was going into the river there was a plume of it floating along the east shore for a mile. I saw one gust of wind take so much out over the river it was lucky no boaters were going by as they certainly would have gotten that in their eyes. Not being able to see while driving a boat could be bad. I’ve tried dozens of times over the years to get them to correct the problem, and it’s still occurring. So, I’ll just have to keep on ragging DEQ about it. That much sawdust certainly can cause problems with bedding fish when it sinks.

We had a pretty crazy mishap this trip. I was in a very limby treetop fighting my way through it to get to a bunch of trash. When all of a sudden, I heard something go blam alam, like when the shotgun drops like it does sometimes down a few inches, but that was followed by a loud shsssssss noise followed by a splash followed by a thick yellow cloud all over the place and all around me. I didn’t know what the hell was going on, then I looked around and saw that the fire extinguisher was discharging, and it wouldn’t shut off even after I got the shotgun off of the extinguisher handle. The splash sound was Moonpie abandoning ship. She thought the whole rig was on fire. So, several months ago I had found this pin-looking thing in the boat, I had kept it not knowing what it went to. I now know what it went to, it was the safety key for the extinguisher! Duhhh!

This was my first trip back to the river since Lynda passed away. I did pretty good, but I only accomplished that with the help of a friend that kept check on me through the entire trip, and left the nicest note on my truck at the boat landing. That contact kept me going, kept me on track. The only time I got really upset was when I pulled into the yard coming come on the third day. Used to when Lynda was home and I would pull into the yard the driveway alarm would go off and that would signal Lynda to raise the shade on the front window to see if it was me returning. I would stop the truck right there and we would stare at each other for a second, then I would pull on around the house. That’s just another weird thing we did. So, yeah, I got pretty upset that I didn’t see that little face peeking at me this time, something I always looked forward to when returning from the two rivers we call the Blackwater and Nottoway.

The saga of the pond cypress

Pond cypresses have reportedly dwindled down to only a few remaining trees known in the wild in Virginia. — Submitted... read more