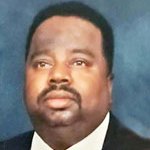 He was a 1975 graduate of Gates County High School. For more than 40 years, Matthew was a member of Scott’s Revival Center, where he served as the Armor-bearer for the late Bishop Clinton Scott. He was also a member of the Male Chorus, the Security Team, the Advisory Board and a former member of the Scott’s Revival Mass Choir. Matthew also provided security for the Young at Heart Seniors Ministry.

Matthew was a former member of the Franklin Male Chorus. After 20 years of service, Matthew retired from Perdue Farms as a quality control inspector. He honorably served his country in the United States Army.

A public viewing will be held on Sunday, March 14 at the funeral home during the following times: 3 to 7 p.m. and Monday from 9 to 11 a.m. The celebration of life will be held at Scott’s Revival Center, 1816 South Street, Franklin on Monday, March 15, at 2 p.m. with Dr. Evelyn Square delivering the message of comfort. The committal and benediction will be held in Southview Cemetery. A service with dignity will be conducted by Wm. M. Johnson & Sons Funeral Home Inc., 224 South Main Street, Franklin. Please share your condolences with the family at wmjohnsonandsons.com.