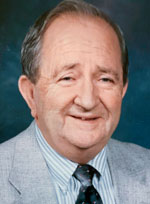 COURTLAND – Charles A.L. Payne, 93, passed away peacefully on Monday, March 8, 2021, in the comfort of his son’s home in Tennessee with family by his side.

Charles was born in Harriman, Tennessee, to the late John and Lura Mae Payne. He joined the Navy and was stationed and discharged in Norfolk. It was there he met and married his first wife, Eleanor White. In 1948, they moved to Franklin, and Charles purchased Franklin Upholstery and enjoyed covering furniture for customers until Hurricane Floyd destroyed the building in 1999.

Charles was very dedicated to the work of the Lord. Upon coming to Franklin in 1948, he and Eleanor helped start the Church of God in Franklin with Pastor J.D. Tabor and Jack and Ruby Simmons. Charles always said that one of his greatest joys was being the music director for the church. In 1973, he became the music director for the Suffolk Church of God of Prophecy, where he served for 15 years. He also enjoyed teaching the senior adult class there.

In 1975, Eleanor passed away. Shortly after he met Evelyn Carr and they were married in 1977. They both enjoyed going to church together and joined what is now the Kingdom Impact Church in Franklin. Charles loved serving the Lord in whatever way God chose to use him. Upholstering furniture was a means of making others happy and serving the Lord was his life.

The family will receive visitors on Friday, March 12, at 10 a.m., at Wright Funeral Home in Franklin. The funeral will follow in the funeral home at 11 a.m. with burial following at Southampton Memorial Park in Franklin.