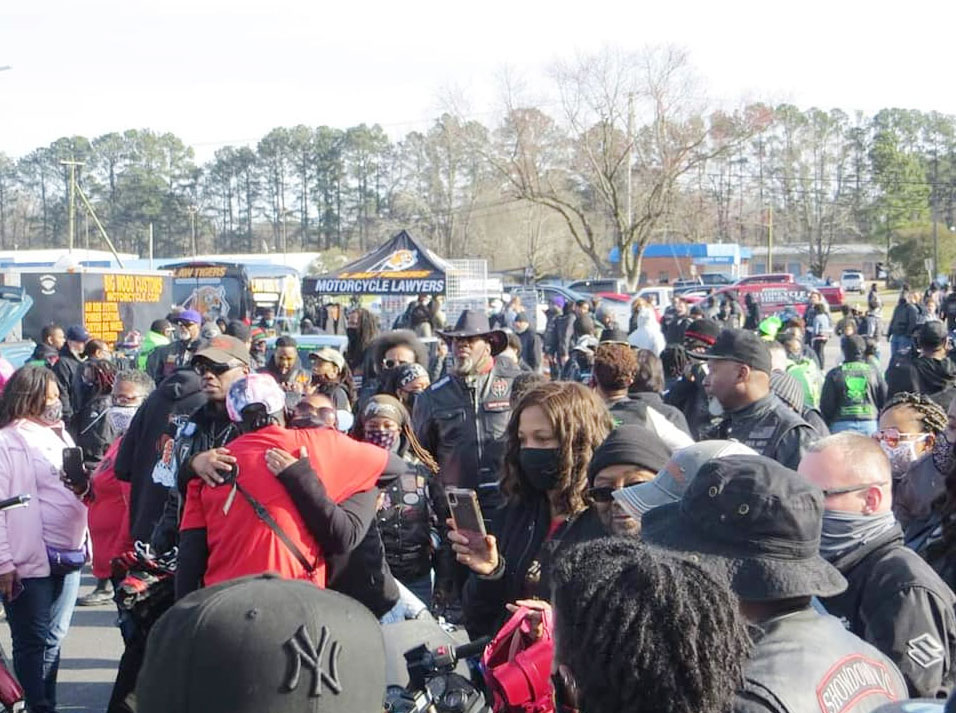 Motorcyclists can be a loyal and enthusiastic bunch. That was made abundantly evident at the campus of Camp Community College in Franklin on March 6. Several hundred riders showed up to support fellow biker Shekelia Bussey at the grand opening of her Moto Mob Riding Academy. There were also about 10 vendors on site.

“I did not expect so many people,” said Bussey, and added she thought at one time there might have been as many as a thousand people, but didn’t know for sure. “Yeah, it was off the chart.”

Whether it was a few hundred or thousand, those numbers also took college staff members by surprise, and quite politely they came out to tell her so.

Dr. Dan Lufkin, college president, later said the college was “… caught off guard when large groups of motorcyclists began arriving on campus. The original Memorandum of Understanding with Moto Mob [Riding] Academy for motorcycle training stated there would be 12 students and 2 instructors from the hours of 7 a.m. to 12 p.m.”

He continued, “When it became clear that a great number of people were continuing to arrive on the Franklin campus, and the proper administrative guidelines as well as required COVID-19 precautions were not in place to host a large event, the Workforce Development Center’s Facility Coordinator notified the Director of Workforce Development and the College’s operations manager. Subsequently, college staff requested that the event organizer end the event immediately. The Franklin Police Department was contacted to ensure the safe exiting of the attendees and ensure that no additional individuals joined the event. 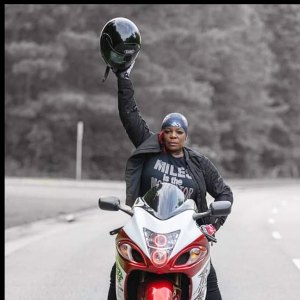 Shekelia Bussey has organized the Moto Mob Riding Academy and arranged for classes to be taught at the Camp Community College in Franklin. — Courtesy

Bussey confirmed that the staff members were very nice about asking her to slowly and safely wrap everything up. She told her crew to guide people out, and the event was closed by 4:30 p.m.

“Everything was very peaceful,” the instructor emphasized. She added that Lufkin called her on Monday. “He was super-nice. He said I was welcome there and looked forward to working with me in the future. He just wished there wasn’t so many people [that day]. I acknowledged that, saying I thought it was just going to be my local people. In the biking community, I’m well known.”

In a statement to the paper, Jeff Zeigler, the director of Institutional Advancement, confirmed that Bussey will be able to continue her class according to the contract. She has agreed to have weekly partner meetings with the facility coordinator and Dr. Angela Lawhorne, director of Workforce Development.

“As we have been doing for the past year, no event will exceed 25 participants or the Governor’s current Executive Order,” Zeigler said. “All students must maintain six feet for social distancing and must wear masks when inside or outside when six feet cannot be maintained. The class size will never exceed 12. If Ms. Bussey expects any visitors, they must be approved by Angela prior to arriving on-site. We are now going to have all facility renters sign a copy of the executive order in place at the time of their rental.

Any time Workforce does approve large events, we always require security, liability insurance, housekeeping, and multiple Workforce Event Specialists to oversee such an event. As this event was not approved (we only approved a small class), these items were not in place.”

The first class will take place on April 10.

“I’ve been working on this project for about seven years,” said Bussey, who’s been riding motorcycles since 2007, and owns several bikes in storage. “I’ve been looking for a site.”

Though initially hesitant about coming to the city from her home Norfolk, she decided, “I’m going to make it work. I’ll take those drives. People will consider it like an adventure. So, why not Franklin?”

The teacher is optimistic that her class will attract potential students from Suffolk, Isle of Wight County, Ivor and Emporia.

Her full time work is motorcycle instruction for all branches of the military. She’s also nationally certified by the Motorcycle Safety Foundation. To learn more, visit her Facebook page.