CAPRON – Nancy Crichton Cox, 78, passed away at home on Saturday, March 6, 2021, with her family at her bedside. Nancy was born in Petersburg and raised in Capron, a daughter of the late James Winfield and Nancy Mason Crichton. She was also predeceased by two sisters, Mary C. Detwiler and Susan C. Miller, and a great-grandson, Matthew Curle. 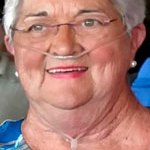 Nancy was a member of Capron United Methodist Church, and had retired as an administrative assistant for Turner Construction Company, and had been a former program assistant for the USDA.

A memorial service will be held at 2 p.m. on Thursday, March 11, in the Capron Cemetery with Mr. William Hart Gillette officiating. In lieu of flowers, memorial donations may be made to Capron United Methodist Church, The American Cancer Society and Capron Volunteer Fire and Rescue.

NEWPORT NEWS – Audrey Mae Hardy passed away on March 1, 2021. A funeral will be held on Saturday, March... read more