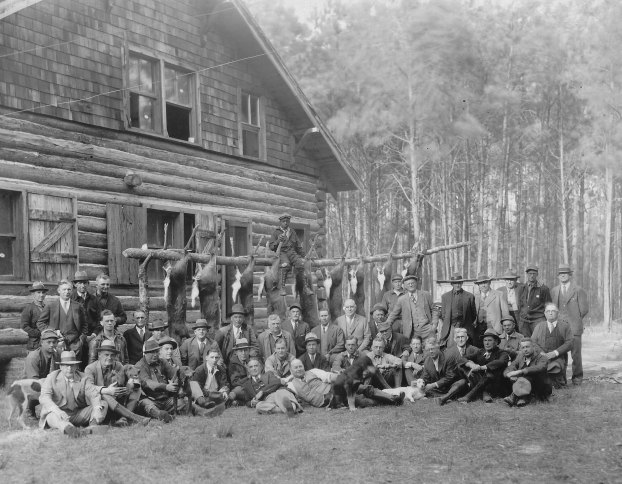 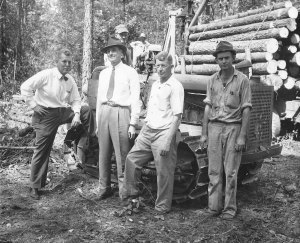 The lease is renewable annually for a period of 30 years. In accepting the lease, Dr. Haig pointed out that the rental is a nominal $1 per year. In effect, Camp Manufacturing Co. is dedicating the tract to research. Dr. Haig further commented that the Camp Company has long been a recognized leader and a major influence in the field of conservation and forestry in the Tidewater area and praised its present action as one of the most significant to date.

James L. Camp Jr. described the 1,365-acre experimental tract as a portion of the 10,000-acre old-growth loblolly pine forestlands, purchased by his uncle, Paul D. Camp, from various landowners, incrementally, during a period dating from as far back as the year 1889 to well into the early 1900s. Prior to 1887, Paul D. Camp was in the full vigor of his early manhood residing at the Old Cowper Home Place at Como, North Carolina — where his sons, Paul Ryland Camp and John Madison Camp, were born. In 1887, Camp Manufacturing Co. was established, at Franklin, Virginia, with Paul as president; his brother, James L. Camp Sr., as vice president; and brother, Robert J. Camp, as secretary-treasurer.

The purchased forestlands, when consolidated under Camp ownership, became known as “The Big Woods.” It is located in Hertford County, North Carolina — about 8 miles northeast of Murfreesboro. Generally, “The Big Woods” is located in the angle formed by the junction of the Meherrin River with the Chowan River, and is bounded on its north by Buckhorn Creek and on its west by Liverman Creek; it, now, as of 1946, has an area of approximately 12,000 acres.

Incidentally, over a good period of time, starting around 1900, Paul Camp, with his brothers and their sons, conducted many hunting trips — for their customers and friends — into “The Big Woods.” They mostly pursued deer, quail and wild turkey. After moving to Franklin, Paul would take trips to the “The Big Woods” on his horse and buggy, crossing the Nottoway River at Smith’s Ferry. Starting in 1915, though, he drove his Buick touring car — still catching the ferry. (The General Vaughan Bridge replaced the Smith’s Ferry crossing in 1920.) Some of the time, he would stay overnight, using for sheltering an abandoned farmhouse or makeshift lean-tos. In 1927, a large log-house-type hunting lodge was built and dubbed “Camp P.D.,” of course, in memory of Paul D. Camp, who had died in 1924. Over the ensuing years, a lot of hunts were held using the hunting lodge as a base of operations; and, many feasts took place there.

The only cutting of consequence in “The Big Woods” for a long period of time was the removal of selected trees for pilings during World War II. This was one of the few forests along the East Coast capable of supplying 100-foot pilings in any quantity. In preliminary surveys, foresters found trees over 50 inches in diameter at breast height — some having a total height of 150 feet. This unusual growth is due to the high productivity of the soil and forest preservation that has occurred over many years.

The research tract will be the scene of different experiments. Some of those will be concerned with different methods of harvesting the forest crop to ensure its renewal and perpetuation; others will be designed to determine methods of maintaining the maximum growth rate throughout the life of the crop. All studies will be directed toward a determination of the most profitable methods of managing loblolly pine in the Coastal Plain of Virginia and North Carolina.

The Northern Coastal Plain embraces an area of 13 million acres in the Tidewater portions of Southeastern Virginia and Northeastern North Carolina. According to the most recent Forest Service survey figures, eight of these 13 million acres are classed as commercial forestland. Forty-eight percent of the forestland is owned by farmers in individual woodlands averaging 50 acres in size. Inasmuch as all the research findings on the “The Big Woods” tract will be made available to the public, small woodland owners as well as larger industrial owners will benefit from the results obtained. According to James L. Camp Jr., the continued welfare of the wood-using industries of the Coastal Plain is in large part dependent on increasing the productivity of the forest resources.

The Franklin Research Center is concentrated on the study of loblolly pine as this forest type covers about one half of the 8 million acres in the North Atlantic Coastal Plain. Bottomland hardwoods comprise the next largest forest type, about 1.6 million acres, which are potential large producers.

We’d have paid a million dollars

By Charles Qualls My wife had some estate business down in Georgia to settle. I went with her, since the... read more