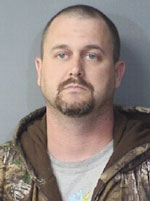 The trial for a Norfolk man accused of killing his stepdaughter nearly six years ago has been moved — yet again — this time from this March 1 to Jan. 19, 2022, and is expected to last a month. There had been several continuances in 2020. The new date has been confirmed by the Southampton County Courthouse and Virginia Courts website.

Wesley Paul Hadsell, 41, was formally charged on Jan. 14, 2019, of first-degree murder of Anjelica “A.J.” Hadsell, on March 3, 2015. Related to the case, he’s also charged with murder – non-capital felony; and concealment of a dead body.

A.J. was a freshman on spring break from Longwood University in Farmville during the time of the disappearance. The search took Norfolk police investigators and a dive team to a pond off Walters Highway (Route 258) and Joyners Bridge Road on April 4.

Within the week, Norfolk Police came to Southampton County and told the Sheriff’s Office of a body found outside a house on the 34000 block of Smiths Ferry Road (Route 258.) The body was taken to the medical examiner’s office in Norfolk, where it was positively identified as that of A.J.

Since his arrest for those alleged crimes, Hadsell has also been charged with selling or distributing a controlled substance, and as a prisoner possessing a Schedule III controlled substance; both dates Feb. 26, 2019. The trial for those issues begins Nov. 22, 2021, and is scheduled to take three days.

To all the aforementioned charges, the suspect has pleaded not guilty.

He had a trial the week of Feb. 24-28, 2020, but Judge Wayne Farmer was compelled to declare a mistrial. Southampton County Clerk of Court Richard Francis told The Tidewater News that Farmer announced Wednesday morning that an issue had arisen and the jury was sent out. Essentially, there was a stipulation about what could come into evidence, he said. Southampton Commonwealth Attorney Eric Cooke made the motion for the mistrial earlier in the afternoon, and the defense did not object.

“So in the interest of fairness,” said Francis, “the judge declared a mistrial.”