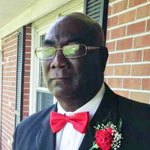 He is survived by his wife of 28 years, Charlotte F. McKeller; his children, Peggy D. Garcia (Charles), Johnnie C. McKeller (Anne Marie) and Barbara J. McKeller (Joel); his brother, Mitchell McKeller; his sister, Mary L. McKeller; grandsons, Alex Garcia and Julius McKeller; sister-in-law, Ethel Mckeller; and a host of nieces, nephews and cousins.
Johnnie was born and raised in Fayetteville, North Carolina, and moved to Virginia in 1973. He was employed by the Hercules Inc. (which later became Ashland Inc.) chemical plant in Franklin for many years before retirement.

He was a faithful member of First Baptist Church in Franklin and served as an usher. He was a people person and never met a stranger. With his cheerful personality, smile and distinct laugh, he made many friends over the years and continued to see or chat with most of them from time to time. He was a generous person who would lend a helping hand to anyone in need, and if he loaned you money, he was confident he would be repaid. He loved his family dearly and his grandsons were the apples of his eyes. Playing golf was his favorite pastime with some of his friends and telling tall tales on the 19th hole. Anyone who knew him is aware that he was a devout Atlanta Falcons fan, no matter how terrible the team played. He was always known for rooting for the underdog. He definitely left his mark on this world and will be lovingly missed by many. RIP Papa/Johnnie Mack.
Wm. M. Johnson & Sons Funeral Home Inc., 224 S. Main St., is assisting the McKeller family. Please share your condolences with the family at wmjohnsonandsons.com