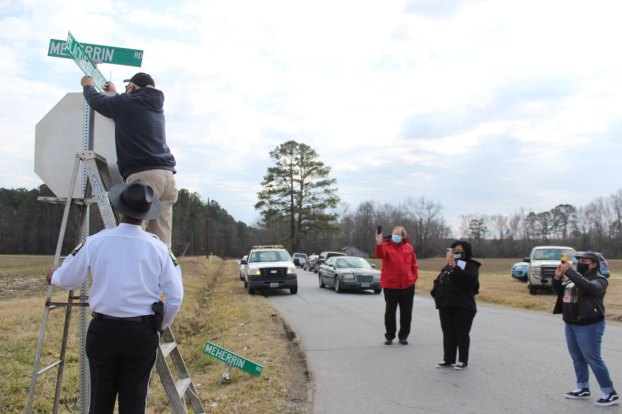 Down with the old. As Sammy Smith removes the Blackhead Signpost Road sign, Southampton County Sheriff Josh A. Wyche Sr. is joined by fellow residents such as Rick Francis and Michelle Covington (far right) in witnessing the name change. -- Stephen H. Cowles | The Tidewater News 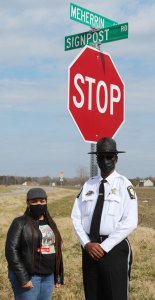 Michelle Covington, one of many Southampton County residents calling for the name change, stands with Sheriff Josh A Wyche Sr. under the new sign of Signpost Road.

After months of public hearings and discussion, a Southampton County road name deemed strongly offensive by many residents was finally brought down on Feb. 11.

Within minutes that afternoon, Sammy Smith climbed a ladder to undo the old sign and then install a new one. As he did so, a handful of people witnessed the change. This included Southampton County Clerk of Court Richard Francis, Supervisor Carl Faison and Sheriff Josh A. Wyche Sr.

In 2020, representatives of a group calling itself Citizens for Change called on the board of supervisors to change the name of Blackhead Signpost Road. The avenue is located off Meherrin Road (Route 35), a short distance from the middle and high schools.

Members such as Michelle Covington — who also attended the sign change — had several times brought to the Planning Commission and supervisors’ attention that the road name is demeaning, particularly for the African-American population, especially in its perceived racist connotations.

Late in January, the supervisors followed up on their 2020 decision to agree to amend the code that governs road names. There had been suggestions such as:

person who was the subject of the horrific incident;

The final vote was to simply call the street Signpost Road. One of the reasons was that it could be less heartburn for the residents who live on that lane.

Covington and Francis were presented copies of the old sign for historical documentation on Thursday.

As Smith was doing his work, Francis noted that this was a historic moment, no matter how small it might seem to other people.

Everyone applauded after the task was completed. Smiling, Covington then said, “I am overwhelmed. This has been a long time coming — a good change — it’s a step forward for Southampton County.”

She added that a historical marker to give context to the road’s history is in progress. In March, the Virginia Department of Historic Resources will review an application for a roadside plaque.