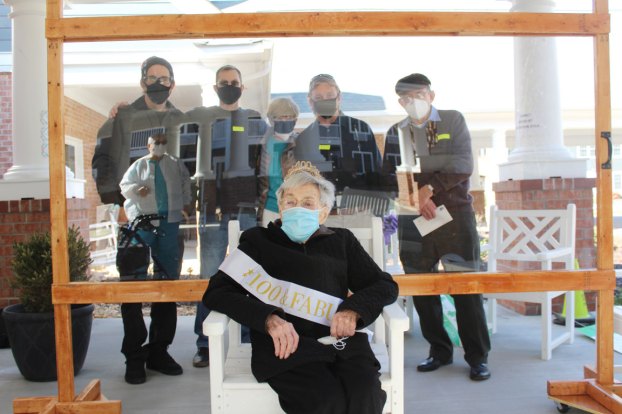 Mary Blythe is seated in front of her family during their visit on Feb. 6. The Village at Wood's Edge resident became 100 years old on Jan. 31. In back are her son and daughter-in-law, Wayne and Cheryl Blythe, and grandsons, Randy, Andrew and Mark. Not pictured is another grandson, Scott Blythe. -- Stephen H. Cowles | The Tidewater News

The family of Mary Blythe of Village at Woods Edge came to pay homage to their matriarch on Saturday. What made this visit extra special for them is that Blythe had recently become 100 years old; her actual birthday is Jan. 31.

Standing behind a clear portable screen, they patiently awaited her entrance to have a photograph taken with her. With the help of a staff member, she arrived sporting a gold tiara (of course!) and a sash that read “100 & Fabulous.” Blythe took her seat in front of her son and daughter-in-law, Wayne and Cheryl Blythe, and her grandsons, Randy, Mark, Scott and Andrew.

Wayne said that his mother was born at Colosse in Isle of Wight County; his father, Irvin Blythe hailed from the Hunterdale section of Franklin. Of the couple’s courtship, Wayne knew only that his parents had been introduced to one another via a friend, and that after they later married went to Raleigh, North Carolina, for their honeymoon.

A farmer’s wife, Mary also worked in the office of the Dixie Plant Farm after Irvin died.

“My mother was a hard worker,” said Wayne. “She also loved to cook, and was a very faithful member and deaconess of Hunterdale Christian Church — that was the sort of the center of her life.”

That Mary has lived to be a centenarian is made more notable by the fact that she had endured health issues that threatened her life. The first was when she had meningitis as an infant. The second is when lung cancer developed at 80 years old … and she’s never smoked. It’s also been necessary for her to relearn to walk three times.

Wayne also said his mother told him that she never thought she’d lived to be 65, but thought that it was “pretty good” to have made it to 100.

He attributed such endurance to her “quiet strength,” a character trait that Randy emphasized.

“She’s a tough old country woman who helped raise me and shape me,” he said. “There’s a lot to learn from older generations.”

Isle of Wight County Schools will continue to provide paid leave for employees who are absent due to COVID-related issues.... read more