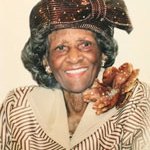 Mrs. Adkins was born on Sept. 22, 1926, in Branchville, to the late Maynard and Burnie Turner Rogers. She attended Southampton Training School and Waverly High School. She worked for the Aster Nut Co. in Boykins for several years and ran a childcare center out of her home for 42 years, caring for 49 neighborhood children over the years. She prepared the young children she kept for kindergarten and offered after-school care for older children.

Besides spending time with her family and friends, Mrs. Adkins had a passion for gardening, sewing, singing and attending her church, Shiloh Baptist in Boykins. She had an amazing voice and shared her gift in her church’s senior choir. Mrs. Adkins had a bright and loving personality and was known for her willingness to help others in any way she could. She touched many lives with her generosity and passion for life.

A public viewing will be held on Friday, Feb. 12, from 4 to 7 p.m., at Johnson’s Funeral Home in Franklin. A private celebration of life service will be held at Shiloh Baptist Church in Boykins on Saturday, Feb. 13, at 11 a.m.

In keeping with the CDC’s guidelines for COVID-19, the celebration of life service will be live-streamed on the Shiloh Baptist Church Facebook page, and facemasks are required at all in-person events.