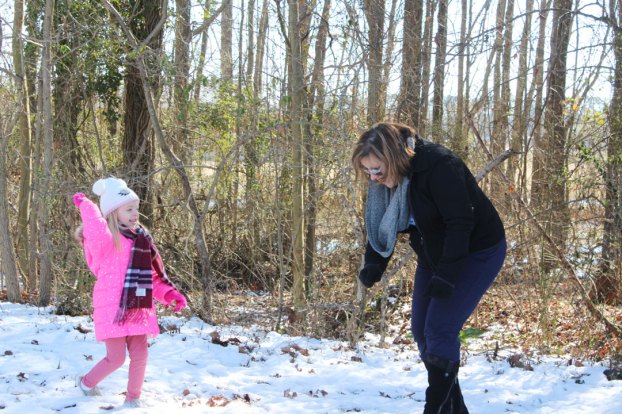 McKinley Parham, 4, prepares to throw snow at her grandmother, Cynthia Cuthrell. Near the Ruth Camp Campbell Library they found enough to play in on Saturday morning. -- Stephen H. Cowles | The Tidewater News 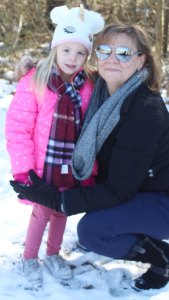 If you somehow missed out on the snow from Thursday morning, be patient. A winter weather advisory is in effect from 10 o’clock tonight, Jan. 30 through noon Jan. 31, for Southampton, Franklin and environs. As of 12:55 p.m. today, the National Weather Service in Wakefield forecasts a 40 percent of snow after 1 a.m., and likely less than a half-inch. Lows around 27 degrees Fahrenheit.

The prediction for Sunday is rain, snow, freezing rain and sleet before 11 a.m., then more of the same minus the freezing rain until 1 p.m. The highs are expected be around 42, so little to no ice accumulation is expected, but new snow and sleet accumulation could be less than an inch.

Tomorrow night, rain is likely before 10 p.m., after which the chance of new snow is 60 percent and about a quarter to half-inch is possible.

Come Monday, there’s a 30 percent chance of rain before 3 p.m., followed by the same possibility of rain and snow. Highs again around 42 degrees. Little to no snow accumulations is expected.

As always, drivers are urged to slow down and be cautious while traveling.

Skies will begin to clear by Tuesday night with lows around 25. Sunny on Wednesday, highs at 46.