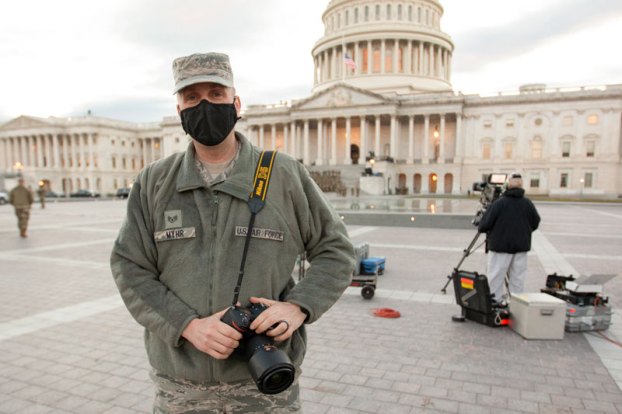 Staff Sgt. Bryan Myhr is a public affairs journeyman for the Virginia Air National Guard. This month, he has been documenting the presence of the military before, during and after the inauguration of Joe Biden in Washington, D.C. -- U.S. Army Photo by Staff Sgt. Elizabeth Szoke 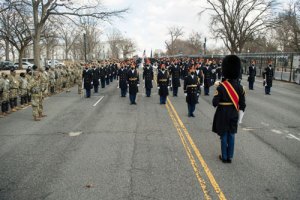 Staff Sgt. Bryan Myhr of Windsor has been employing his photography skills for the past few weeks leading up to Inauguration Day in Washington, D.C.

Myhr (pronounced meer) is a public affairs journeyman for the 192nd wing of the Virginia Air National Guard, and has been documenting the presence of the military ever since a large group of people attacked the Capitol on Jan. 6.

There had been fears that more such attacks might take place on the occasion of Joseph R. Biden’s swearing-in ceremony at the Capitol. Speaking on Jan. 18, Myhr sounded unworried.

“I don’t know I really have concerns,” he said. “It’s a very safe place now. There are so many people. We’re all one big team — 2,300 Virginia guardsmen.” 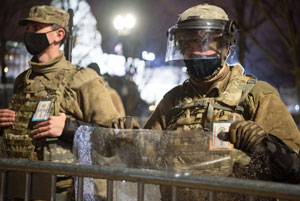 Anticipating that they’d be present at least through the inauguration, Myhr was thrilled about the opportunity to be present.

This duty to his country is a long way from when Myhr was once a full-time wedding photographer in Virginia Beach.

Born in East Hampton in the eastern part of Long Island in New York, he had at one time actively served in the Army. Myhr was a saxophone player for the 76th Army Band, which took him to “Germany, France, Belgium, Morocco, Czech Republic, Iraq, Qatar, Kuwait, Netherlands and Luxembourg. The rest of my traveling was while taking leave in Europe, at least 10 more countries.”

He continued, “We were deployed on a musical mission, providing morale support and ceremonial occasions. We played for the troops, local people and an orphanage in Iraq. That was a neat experience.”

After his service, Myhr decided to move to Virginia Beach in 2007.

“My mother had moved here, and that’s where I came to stay.”

There he worked for nine years in wedding photography, but also did a brief stint as a freelance photographer for the Virginian-Pilot.

“I found I was good at it,” said Myhr. “I always had an itch. As a kid I took photos for the local paper, the East Hampton Independent.”

He then started working for the Army as a civilian in Fort Eustis, and also joined the Guard part-time.

The desire for more open space to raise a family compelled Myhr and his wife, Rachell, to move to Windsor.

“I have kids [Bridget and Evan], and I always grew up near the woods. I wanted us to have a more open, rural lifestyle,” he said.

Her parents are nearby, and his mother, Susan, is now in Suffolk. Myhr’s late father was Trond Myhr from Norway. He had been a submarine technician for the U.S. Navy.

Myhr remains posted in the capital.

“I was incredibly honored to have the privilege of photographing Virginia National Guard soldiers and airmen yesterday during the inauguration. I am still here in D.C. When my orders terminate, I will return to my civilian job, like many in the National Guard.”

To see more of his photography and videos, visit tinyurl.com/MyhrGuardPics.