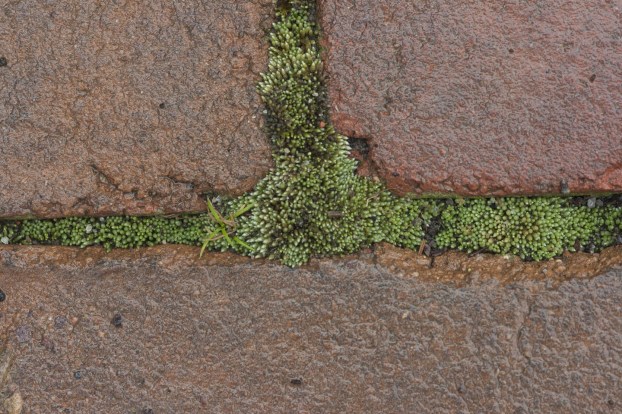 The growing season for most plants is over by the end of fall — even the asters that can persist into December have shriveled and finished their blooming for the season.

But winter is the season when many mosses are green and reproducing. Easy to see on cold rainy days in January are those that live in the mortar between the concrete in sidewalks and brick walls and in asphalt.

Mosses don’t require much to make a life. A little moisture and a tiny amount of mineral soil and their spores open to start new growth. These small plants are pioneer species, making a home for the plants that have tubes to transport water (vascular plants). Only one cell thick, they soak up water from the environment. If no water is available, they will be dormant until the next drop arrives. A vigorous population of mosses allows the seeds of vascular plants to sprout; Norie Burnet of Eden Woods in Chesterfield tells visitors that a moss garden is just as much work as a wildflower garden since the vascular plants are constantly “invading” the moss carpet.

Here are three common mosses easily recognized without magnification. These tiny plants usually do not carry common names since there are so few observers. A few authors have invented some names that try to describe the plant.

This is the moss most characteristic of cracks in sidewalks, also found along paths, in gardens and fields. The entire plant is no more than 1 centimeter tall (less than ½ inch) and the leaves are only 1 millimeter long. Round stems are upright, tightly packed and appear silvery to pale green since the leaves have lost their chlorophyll at the tips. Nothing else looks like this moss in sidewalk cracks. The second name argenteum is Latin for “silver.”

The photo includes an emerging vascular plant enjoying the lush environment provided by the moss. 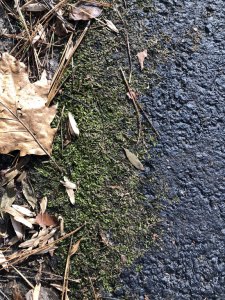 Named probably by a female botanist who reports: “Dried, the moss looks like glossy embroidery floss.” It is found everywhere — on tree bases, rocks, concrete blocks, roof shingles, asphalt and in the mortar and on sidewalks. It is easily recognized by shiny, green-yellow stems that are round and wormlike, with scaly overlapping leaves. Entodon refers to the teeth in the capsule; Ralph Pope, author of a field guide, says the name seductrix suggests the author “clearly spent too many years in the lab.”

The bright yellow-greenish leaves are twisted, like pigtails. This small moss often forms large cushions in open bare soil, on soil over rock and cement. The genus name honors a botanist F.W. Weiss and the epithet (species name) refers to problems with nomenclature.

By Stella Payne Master Gardener   Do you truly see your surroundings? Does your busy life jade your ability to... read more