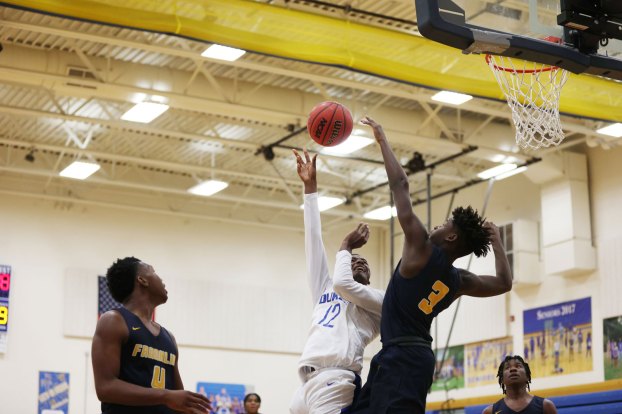 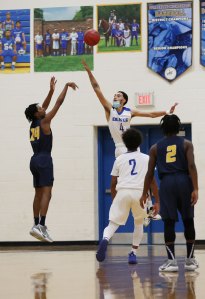 Special to The Tidewater News

The Franklin High School varsity boys basketball team came through when it counted most Monday, Jan. 4, opening its regular season with a 45-40 overtime victory against host Cumberland County High School.

The Dukes came back to force overtime by tying the game, 36-36, at the end of regulation, but sophomore point guard Derrick Perry helped the Broncos pull away for good in the extra session.

The coach said he thought the game represented a very scrappy effort, defensively, from his young team coming into the season. The Broncos’ roster features a freshman, three sophomores, three juniors and only two seniors.

“I think we had a four-point lead down the stretch, and they closed it up, tied it up, and we went into overtime,” Cutchins said. “We were fortunate we were able to get to the free throw line and make some free throws coming home.”

Perry ended up leading all scorers in the game with 19 points. Broncos junior forward Kenaz Jones added 12 points and also made a significant impact at the other end of the floor.

“I thought Kenaz Jones did a heck of a job,” Cutchins said. “Obviously he had 12 big points, but he had a lot of big defensive stops. He had four blocks that I can recall in the second half that were huge for us inside, so he did well.”

Cutchins affirmed that Perry and Jones were the players he expected to lead Franklin coming into this season. They started for him last season as freshman and sophomore, respectively.

“Those are the only two guys that really had a lot of floor experience, so those are two guys I knew I was going to lean on, but offensively, I didn’t know what they could give me,” he said.

While the coach noted that his team struggles shooting the ball, he said his players knocked down big shots throughout the game Monday that helped a great deal.

The Broncos (1-0) hosted Charles City High School on Tuesday evening, Jan. 5, and will visit the Panthers on Thursday, Jan. 7, at 6 p.m. for a rematch of Tuesday’s game.

Janaia Trent and Allie Hurt are ready to intercept wherever Ja’Carra Whitehead is looking to pass the ball. In back,... read more