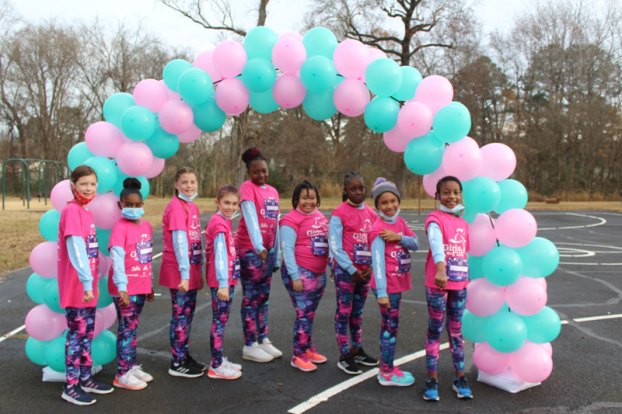 Nine Franklin girls stand under the balloon arch before starting their 5K race at the MLK Community Center on Saturday morning. They are the first participants in the Girls on the Run program in the city. -- Stephen H. Cowles The Tidewater News

Girls run for their own sakes 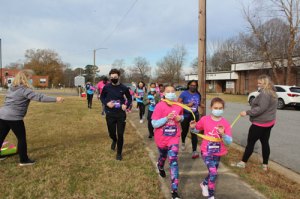 Molly Starkweather, left, and Melina Heath are the first to break the ribbon at the start of the 5K. Holding the tape are Ellen Carver, executive director of the Hampton Roads Council of Girls on the Run. At right is the team’s coach, Ali Reynolds. Each of the girls was accompanied by a running buddy. — Stephen H. Cowles The Tidewater News

With COVID-19 precautions in place, the nine members of the Franklin contingent participated in a Girls on the Run event on Dec. 12, a first for the city.

The start and finish line was a balloon arch at the Martin Luther King Jr. Community Center. The activity was the first of two in Western Tidewater that Saturday; the later race happened at Pioneer Elementary School in Suffolk.

For many girls, it was their first race and a fun time, and several said they would do it again.

Girls on the Run, according to its website, is a national nonprofit that develops positive qualities of self-confidence, connection, character and caring in girls on the elementary and middle school levels through physical activities such as running 5K races. 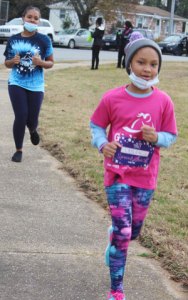 Laylen Johnson and her running buddy on their second lap. — Stephen H. Cowles The Tidewater News

The program is a campaign that began in 1996 in Charlotte, N.C., also with 13 girls, and it grew in participation and locations from there each year. By 2000, the nonprofit had gone international. The Hampton Roads Council, one of seven in Virginia, is led by Ellen Carver. The Hampton Roads Council has 34 smaller groups. Suffolk began its Girls on the Run five years ago and now has 12 participating sites. The organization is also reaching into Southampton and Isle of Wight counties as well as Franklin. For this growth, she credits the Obici Healthcare Foundation, which has largely funded the program.

“In a normal season, there would be a single race that brings all those little teams together and might include as many as 2,000 people,” she said. “Because of the pandemic, we did site-based 5Ks.”

That is a plus in Carver’s view.

“There are a lot of benefits [to having smaller races]. It’s more intimate, less intimidating and promotes team-building,” she said, and added the next will be in May.

Helping to build teams locally is program director Ali Reynolds of Suffolk. She started recruiting and training in September. Previous to joining the regional organization in February, she had been in the museum industry, and decided on a career change to empower girls and women. Reynolds said she found that in Girls on the Run, which is the national philanthropic focus of her sorority, Gamma Phi Beta.

The day’s events were the last in the season for the HRC, but Carver was anything but exhausted from all the preparations and cheering.

“It was energizing,” she said. “Not exhausting at all!”

Spirit of Moonpie and I spent the 9th through the 11th (my Bday) on the Blackwater below Franklin. The water... read more