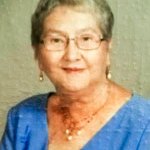 Born in Glen Falls, New York, she was the daughter of the late Frederick Tunstall Parker and Belva Norton Parker, and was also predeceased by a brother, Frederick T. “Freddie” Parker II.

A funeral will be held at noon on Tuesday, Dec. 15, in Wright Funeral Home with Father Charles Saglio officiating. Entombment will follow in Meadowbrook Memorial Gardens in Suffolk.

Memorial donations can be made to Franklin Cooperative Ministries.