SEDLEY — Mr. Lloyd “Monk” Byrd Sr. answered the call from his heavenly Father above to come home and take his rest on Thursday, Nov. 19, 2020, while peacefully resting in his home in Sedley. 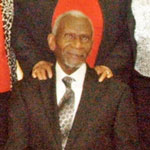 He was a native of Southampton County born on Feb. 24, 1924, to the late Lillie Vick and Robert D. Holloman.

Lloyd was 16 years old when his mother passed away, and his aunt and uncle, Gertrude and Eddie Ricks reared him as one of their own children. He began to work on the farm with his uncle Eddie until he could find a better job. Eventually, he moved to Portsmouth, Virginia, where he became a chef at a local restaurant. He returned to Southampton County, where he married Gracie Banks at the age of 17.

Lloyd was employed with Union Camp Corporation in Franklin and retired as a logger.

“Monk” was preceded in death by his parents, and one sister, Inez Freeman.

A public viewing was held in the funeral home on Monday, Dec.7, from 1 to 7 p.m.

A service with dignity was conducted by Wm. M. Johnson & Sons Funeral Home Inc., 224 S. Main St. Please share your condolences with the family at wmjohnsonandsons.com.