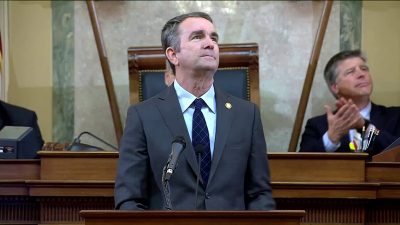 Gov. Ralph Northam announced a midnight to 5 a.m. curfew, a reduction in gatherings and an expanded mask mandate. (File photo)

In an effort to curb a statewide COVID-19 surge, Gov. Ralph Northam announced he would impose a modified stay-at-home order with a midnight to 5 a.m. curfew and further restrict gatherings to just 10 people beginning Dec. 14 as well as tighten the mask mandate.

The measures will remain in place until at least Jan. 31 unless rescinded or amended.

“We need to start with some hard realities,” Northam said at his Dec. 10 briefing. “The case numbers in Virginia are still better than most of the rest of the country, but they’re not good anywhere, even here in Virginia.”

Northam said that unless people are commuting to and from work, they should stay at home between midnight and 5 a.m.

“If you don’t need to go out, go home,” Northam said. “This is just plain, common sense.”

Also, Northam noted that no health district is below 5% in its seven-day positivity rate for COVID-19, and he cited an 80% rise in hospitalizations over the past four weeks as reasoning behind his latest order.

To stress the importance of his measures, he played a video record by an ICU worker from Ballad Health in Southwest Virginia, where cases have been higher than the rest of the state, to speak virtually.

“We’re losing more than we keep,” she said, adding, “I’ve put an ungodly amount of people in body bags.”

Northam, though, faced questions on whether a curfew when fewer people are out would be an effective means of tamping down the number of positive COVID-19 cases across the state, with more than 3,000 per day for the last five days, including a record 4,398 cases reported Dec. 9.

Gatherings, which had been at 25 people since his executive order announced Nov. 13, will now be limited to just 10 people.

“Cases went up, so we have taken that action,” Northam said.

This story will be updated.