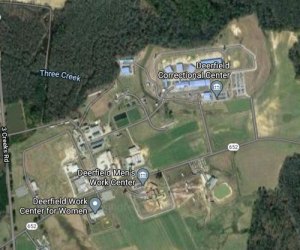 Multiple prisons within the state have reported outbreaks during the COVID-19 pandemic. Among the five prisons with the most confirmed total cases and deaths is Deerfield (835 cases), located in Capron. — Courtesy GoogleMaps screenshot

Prisons are divided into “zones.” Inmates have been given personal protective equipment. Visitation is canceled. Testing has ramped up. Still, the positive COVID-19 cases continue to climb within Virginia prisons.

The Virginia Department of Corrections reported on Dec. 10 that there are 593 active cases among inmates and 227 among staff, which includes employees and contractors. There have been over 5,200 positive COVID-19 cases and 35 deaths reported among inmates since late March. More than 1,250 staff cases have been confirmed since the spring. 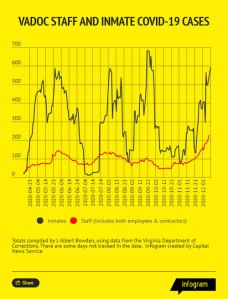 The data is compiled from Virginia Department of Corrections by J. Albert Bowden. It is intended to provide a snapshot of active cases going back to April 8, 2020. There are a few days that were not entered throughout the 8-month period.

The recent spike in cases came after a dip in October and November, which followed a flurry of positive cases in September. Outside of prisons, COVID-19 is rippling through the state with a new high daily record reported this week.

Advocates question the safety of inmates and why the virus has spread so quickly in prisons that are removed from day-to-day activities that contribute to spread.

Eden Heilman, the legal director of the Virginia American Civil Liberties Union, said that Coffeewood Correctional Center in Culpeper County has received multiple complaints from inmates regarding the facility’s handling of the virus. Almost 600 inmates at Coffeewood have tested positive for COVID-1 — the prison ranks third in the state with the most cases.

Keith Hill, an inmate at Buckingham Correctional Center located outside of Dillwyn, informed the Coalition for Justice that there have been issues with proper isolation within cells and that individuals who have tested positive for COVID-19 have not been properly isolated from inmates who haven’t contracted the virus. The Coalition for Justice is a Virginia-based nonprofit that seeks to drive positive social change.

However, VADOC said prisoners with COVID-19 are separated from others. Offenders who test positive are placed in medical isolation so they don’t infect others and treatment follows the department’s COVID-19 medical guidelines, according to Lisa Kinney, VADOC spokesperson.

Prisons are divided into three “zones” to help mitigate the spread of the virus, according to VADOC spokesperson Greg Carter. The red zones are COVID-19 areas, yellow zones are quarantined areas or busy areas with undifferentiated patients, and green zones are low traffic areas and places with no known COVID-19 cases and no symptomatic offenders.

Christopher Wright, an inmate of over five years at Coffeewood, contacted a Capital News Service reporter by phone. He said the facility was doing a good job until they took in transfer prisoners from Buckingham Correctional at the end of September. Wright said he tested positive for COVID-19 on Nov. 4.

VADOC suspended facility-to-facility transfers in March. Carter said that transfers remain suspended except “under special circumstance,” warranted by medical or security issues. He did not have information on which transfers have been completed.

VADOC provides inmates with masks, gloves, gowns and face shields, Kinney said in an email. Inmates and employees are required to wear personal protective equipment at all times, Kinney said. The department also provides oxygen on-site and inmates are transported to hospitals if necessary, she said.

Kinney said VADOC spent approximately $2.7 million through June 30 on PPE, hand sanitizer and cleaning and sanitation supplies. The department anticipates it will spend an additional $2.5 million from July 1 through Dec. 31.

VADOC is also manufacturing masks for use by staff and inmates at its four apparel plants. The agency said in March that they hoped to produce 15,000 masks per day.

Secretary of Public Safety and Homeland Security Brian Moran said during a Nov. 15 press conference that close to 50,000 tests had been administered in prisons. Moran said that roughly 3,812 inmates recovered from the virus. In November, VADOC said it began weekly testing of infirmary staff.

Bryan Lewis, an epidemiology expert at the University of Virginia, said although he doesn’t closely follow the number of cases or distribution of protective equipment within prisons, that “clearly there have been sizable outbreaks in the prison system.”

“So one could conclude that perhaps the current levels of PPE and the stringency of infection control measures have not been sufficient to keep disease at bay,” Lewis wrote in an email. “In some ways this is an impossible situation, either you have to cut off visitors and institute very strict screening etc. on employees, and even if you do, eventually the disease will get in somehow.”

VADOC did not respond to an inquiry asking how effective the zones are given the spikes in new cases. VADOC was asked to elaborate on what could be contributing to the increase in cases, and if it was planning to change anything about its procedures, such as the zone management of inmates.

VADOC has issued guidance on food service for inmates and staff throughout the pandemic.

Margaret Breslau, a chair of the Coalition for Justice, said she has received multiple letters containing complaints by inmates during the COVID-19 pandemic.

“They’re shutting kitchens down, so they developed an emergency menu,” Breslau said.

VADOC created an emergency two-week menu in March to be used in the event of reduced staff. The menu consisted of items such as boiled eggs, hotdogs or chicken patties for lunch, served with chips and MoonPies or a fruit snack. Whether or not it was implemented, Breslau said, “no one in the administration is saying so, but given what is being reported, it sure seems to be the case.” Breslau said that in some places this menu has lasted for a long time.

VADOC did not respond to two CNS inquiries asking if the emergency menu was still in place, or if food service was operating as normal.

Multiple prisons within the state have reported outbreaks during the COVID-19 pandemic. Five prisons with the most confirmed total cases and deaths include: Deerfield (835 cases), Greensville (690), Coffeewood (590), Dillwyn (350) and Buckingham (345). Deerfield has the state’s largest population of older inmates, and an assisted living unit on site. Many have physical disabilities or medical issues, according to VADOC.

VADOC reports daily the cases from 40 state prisons. Jails in Virginia are run locally and overseen by the Board of Local and Regional Jails. More than 230 inmates have tested positive for COVID-19 at the Chesapeake Correctional Center in Chesapeake County as of November, according to a news release.

The Virginia General Assembly approved a measure earlier this year that allows VADOC to release inmates with less than one year left to serve in their sentence while the COVID-19 emergency declaration is in effect, according to a press release. Offenders convicted of a Class 1 felony or a sexually violent offense are not eligible for consideration. The exact number of individuals eligible for early release consideration will change depending on the length of the emergency declaration order. Part of the criteria considered for early release also includes that the inmate has a low recidivism risk ranking and an approved home plan, according to VADOC’s website.

Regarding early release for inmates with COVID-19, VADOC is moving incredibly slow and is tied up in a “bureaucratic review process,” Heilman said. As of Dec. 8, 786 inmates had been issued early release, according to VADOC. Almost 430 inmates have been released from local jails whose cases fell under VADOC jurisdiction.

Wright, who said he is serving an 8.5-year sentence for robbery that ends in three years, is frustrated by the pandemic and the lack of attention to issues in the prisons. He said “nobody really cares about us.”

“We’re the bottom of society,” he said.

NEWSOMS The Christmas parade scheduled for this Saturday, Dec. 12, has been canceled. Brent Edwards of the Newsoms Ruritan Club,... read more