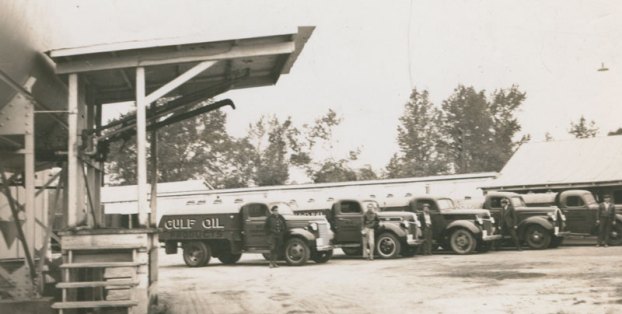 Delivery trucks lined up at the distribution plant, next to the new office. This photo was taken in 1940. Submitted | Clyde Parker 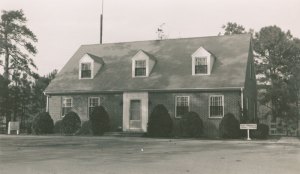 The new GULF Products office building, which was established in 1945. Submitted | Clyde Parker

Sol W. Rawls Sr., distributor of Gulf Oil Corporation products for this territory, moved yesterday into his handsome new office building located on Bowers Road. His new base of operations is located right next to the Blackwater River and across the tracks from Southern Railway’s historic railroad depot. (W. Hunter Scott, founder and developer of Hunterdale, Virginia, was the general contractor for the job. Scott’s expertise in fitting building design and construction to reflect the theme of a particular business house is well-known. Incidentally, many people will recall that Scott was the primary contractor for the construction of the Franklin Naval Air Station during the recently completed World War II.)

John C. Bradshaw did a good part of the actual construction work on the Rawls building. It is a handsome story and one-half brick building (32 by 47 feet) and is beautifully finished on the interior. There are five commodious offices on the first floor, two of them in paneled cypress walls and three in heart pine — done in natural finish. The rooms have sound-proof Celotex ceilings. The building, from its basement, is heated by a General Electric central hot air circulating plant which can also be used as an air-conditioning outfit in the summer. The lighting throughout is with new and improved fluorescent fixtures.

Venetian blinds are used at the windows. There seems to be no lacking in every conceivable convenience for comfort. There is a large high-pitched basement, and a well-designed attic with Celotex ceiling. All of the hardware fixtures are handsome and modern. Offices are provided on the ground floor for Mr. Rawls and Captain Sol W. Rawls Jr., who will be associated here with his father on his return from service in the U.S. Army. Also, offices are being provided for George Watkins, Mrs. Watkins and Mrs. D.B. Richardson.

The grounds are well-landscaped with shrubbery, and at the rear of the building, which borders the river, it is Mr. Rawls’ intention to clear the undergrowth leading to the river which will materially add to the appearance of the place. 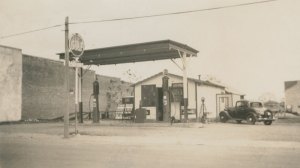 One of the Rawls service stations, which was located at the southeaster corner of Franklin Street and Second Avenue, in Franklin. 1940. Now it’s the site of a former bank. Submitted | Clyde Parker

Besides his business as a Gulf distributor, Mr. Rawls has other commercial interests here, including numerous GULF service stations throughout the western part of the Tidewater, Virginia region. Mr. Rawls also serves on the Commonwealth of Virginia Highway Commission and represents the Norfolk- Suffolk-Franklin District on that commission.

A slight break in Franklin’s critical housing situation was promptly caulked-up over the weekend by the arrival of the Kenneth Bruce Trousdell and Joseph Taylor Stewart families. Those men are employees of the United States Forest Service and have been assigned to the Franklin Research Center. They are currently engaged in the study of problems relating to the growth and management of the region’s loblolly pine woodlands — raw materials, of course, used in the manufacture of lumber and paper products at Camp Manufacturing Co. The Camp company owns considerable acreages of woodlands, stretching from southern Virginia well through North Carolina and down into South Carolina. Additionally, the company owns and controls in excess of 49,000 acres of the Great Dismal Swamp over in Nansemond and Norfolk counties.

For the past two years, Mr. Trousdell has been engaged in collecting and compiling statistics on lumber production in Virginia. Similar checks in other states have enabled the United States Forest Service to furnish, on a monthly basis, detailed reports to the United States War Production Board. Those reports have detailed the quantity of lumber being produced, expected future lumber production, the effect of various governmental directives on the lumber industry, and critical equipment needs. In many indirect ways, timber resources and lumber production have been critically important to the war effort. Now that the war is over, timber and lumber resources are still important to the security and economic well-being of the United States. Prior to his present assignment, Mr. Trousdell was in charge of forest management activities on the Ouachita National Forest, headquartered in Hot Springs, Arkansas. His duties here will be of a similar nature.

The forestry career of Mr. Stewart is a fine example of career opportunities that are available to determined youth in this land of democratic opportunity. Beginning in 1933, as an enrollee in President Franklin Roosevelt’s Civilian Conservation Corps Camp at Walhalla, South Carolina, Mr. Stewart was exceptionally successful. He moved up progressively and rapidly to assume positions as a group leader, foreman, camp superintendent, fire guard and forest ranger. Those assignments took him to forestlands in several neighboring states, his last position being that of forest ranger on the General Andrew Pickens District of the Sumpter National Forest in South Carolina. His duties with the Franklin Research Center, in his capacity as superintendent of the various regional experimental forest locations, include supervision of construction, maintenance activities, and fire control.

CLYDE PARKER is a retired human resources manager for the former Franklin Equipment Co. and a member of the Southampton County Historical Society. His email address is ParkerC@seva-redcross.org.