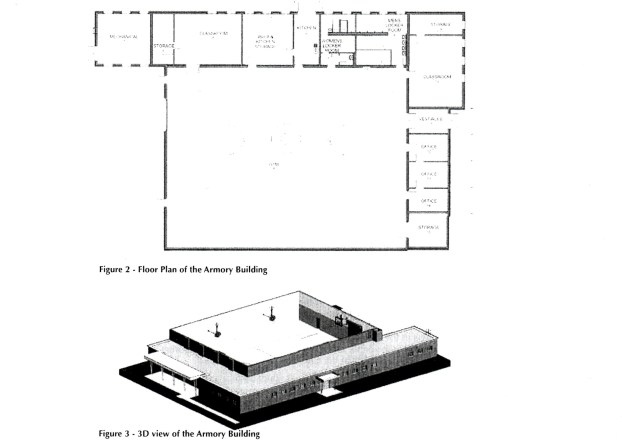 A 237-page feasibility study by PMA Architecture doesn’t give a cost estimate for what it will take to renovate Franklin’s abandoned Virginia National Guard armory into a community center, but chances are it won’t be cheap.

According to PMA’s report, long-deferred maintenance of the circa-1953 structure has resulted in a leaky roof that has deteriorated to the point where it must be replaced in its entirety. There are also cracks in the building’s brick veneer and concrete block walls. It will need new windows, new doors, new ceiling tiles, new floors, a new parking lot capable of accommodating 312 vehicles and redesigned bathrooms that meet Americans with Disabilities Act standards. Additionally, there is lead in many of the painted surfaces of the building and, in some areas, asbestos too.

“Much of the interior finishes and mechanical systems are obsolete and in advanced stages of deterioration,” the report states. “In essence, the building will need to be fully renovated to meet the functional needs of the community and the code requirements of the Twenty First Century.”

The National Guard pulled out of the facility in 2019 owing to its outdated and dilapidated condition. But the building is relatively sound structurally. Ownership officially reverted to the city earlier this year.

In the early 1950s, the then-town of Franklin donated five acres once owned by members of the Camp family to the National Guard for the purpose of constructing the armory, with an agreement that the municipality could occasionally use the building for civic, social and athletic functions.

Earlier this year, Paul D. Camp Community College received a $50,000 grant from the Obici Healthcare Foundation to fund the feasibility study, with the idea that the building could be repurposed to host a variety of community activities — potentially including college basketball games in the gymnasium should Camp at some future date decide to add basketball to its athletics program.

The town of Windsor, located roughly 15 miles from Franklin, undertook a similar $1.2 million renovation in 2018 to convert a 1950s-era middle school gym into the Windsor Town Center. That building is slightly larger than the armory, but the work didn’t include all the renovations PMA has recommended. Windsor’s Town Council is now considering borrowing up to $300,000 to replace the town center’s roof, which wasn’t addressed during the 2018 renovation.

City Manager Amanda Jarratt said it would likely be several months before any decision is made regarding the armory.