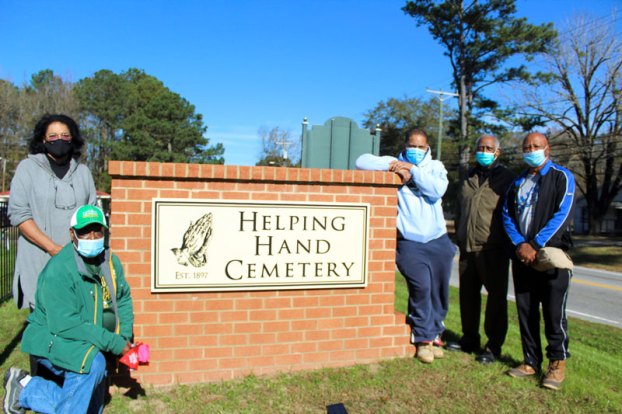 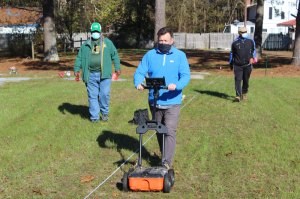 David Givens, director of archaeology for Jamestown Rediscovery, pushes a ground-penetrating radar at Helping Hand Cemetery in Courtland. The equipment is used to find where ground has been either left untouched or used, such as for a grave. Behind Givens are members of the cemetery club putting flags as markers where there might be potential burials. Stephen H. Cowles | The Tidewater News

Helping Hand Cemetery Club trustees watched as a survey was taken of the burial field in Courtland starting in the morning of Nov. 19. The task was not as simple as counting visible tombstones. Instead, a ground-penetrating radar was used to find the numerous graves thought to have vanished below, with few, if any, clues to their identity.

“We’ve been planning this for about three years now,” said Dr. Melvin R. Johnson, club vice president and one of the trustees. Pointing to other stewards in attendance, Johnson added, “We’re all related on one level or another. Most of us have parents and grandparents buried here.”

He explained that the club’s purpose has been to raise money for upkeep of the grounds and to help families with burial expenses. Previously, James Scott and his daughter, Kathy, were trying to manage everything, but they’ve had to retire for age-related reasons. James, for example, is said to be about 102 years old.

“A number of us said, ‘Let’s jump in and re-establish the club,’” said Johnson, calling this project a proverbial labor of love. “It’s showing respect for our family members. I think we’ll find unmarked graves dating to the early 1900s.”

Another factor in the search is to determine availability of space for future burials.

On hand to help find potential graves was David Givens, director of archaeology for Jamestown Rediscovery. He brought a radar that looks very much like a lawnmower, and he evenly pushed it back and forth across the grass and bare spots.

He said, “In certain conditions (ice), our machine can penetrate over 100 feet. Typically in Tidewater, we only get down to 14 or so feet.”

The equipment includes a tablet that indicates and records where ground is likely to be untouched (smooth lines) and areas possibly disturbed in some way (squiggly lines).

Givens has done similar work at the Historic St. Luke’s Cemetery in Smithfield. He is also doing research at the first Black church in Williamsburg proper.

The self-described “dirt surgeon” came to the project because Johnson connected with a fellow Mason, Larry D. Christian, who is an administrator at Colonial Williamsburg. Their chance conversation made the trustee aware of the equipment that might possibly be of use in the club’s project.

The archaeologist said, “This was a volunteer project and not something that we often do. Dr. Johnson and I had been communicating for several months before we had the time to get out and help.”

About his participation, Givens said, “I think that preservation and history take many forms, and this cemetery work was a great opportunity to engage.”

Though unsure of the total number of potential graves found, the archaeologist said, “quite a few flags [were] placed in the ground. I would say over a hundred.”

The survey, he added, was a learning experience for him. “It was easier than I had expected. This is a time period that we don’t often work in (19th- and 20th-century). Burial practices are very different from the 17th- and 18th-century cemeteries that we have surveyed thus far.”

As near as Givens can foresee, there’s no need for him to return, but, he added, “I hope we can continue to work with Dr. Johnson and the community in the future.”

When the archaeologist and his assistant were done, the physician took them first to the nearby community center, which was a Rosenwald School. In the early part of the 20th century, it served as an education and training facility for the Black population at the time. Then they went to Macedonia Baptist Church near a convenience store further up the road.

“The cemetery there we believe was for the first colored residents of Courtland,” said Johnson. “We went back and I showed him the layout. We discussed the possibility they might like to do a survey there late next next year.”

He agreed that to excavate each potential grave for forensic identification would be too laborious and expensive. Instead, once sites are pinpointed, the unknown deceased will be remembered with small, in-ground stones or some other type of marker that will allow maintenance without tearing up the sites.

“We’re beginning to work on that now. It probably won’t come to fruition not until the first quarter of the coming year,” said Johnson.

Board also OKs changes in fines, filings COURTLAND At its most recent meeting — all done electronically owing to health... read more