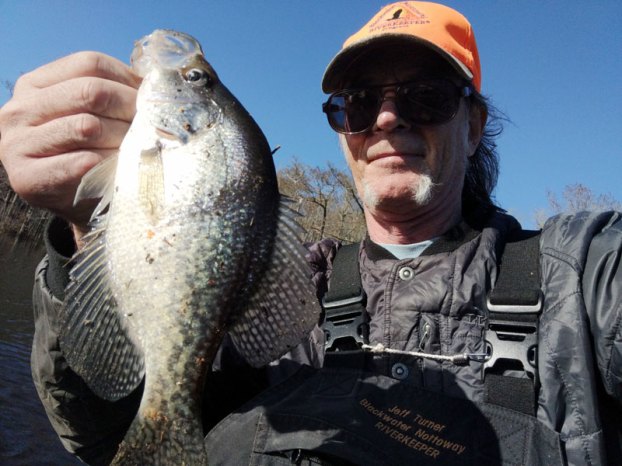 The RiverGuard holds up this speckle he recently caught in the Nottoway River. Submitted | Jeff Turner

Spirit of Moonpie and I spent the 19th through the 21st on the Nottoway below the Bronco Club. The water was 50 degrees, high, fast and clear. Air temps ranged from 43 to 65 degrees. Very nice fall weather indeed.

Trash on this trip was pretty bad for this part of the Nottoway. It was to be expected though with the recent (again) high-water event. I picked up about a half a bag, most of it was glass bottles, which tells me it was old trash. I did find a lot of Styrofoam that has washed downriver from above Courtland where the great Styrofoam fiasco took place in 2015.

The fishing on this trip was very good. I did not cast any for bass. However, I did catch a bunch of speckle and mudgappers. Most all of the speckle were very nice size, as were the mudgappers. I did not keep any fish this trip. I actually caught six different species. Mudgapper, shellcracker, speckle, yellow catfish, channel catfish and blue catfish. All the fish caught on the blade bait or white jig.

Well, here goes another one of those crazy river stories that can’t seem to be explained. So, I was at the mouth of Round Gut fishing when over in the swamp I hear this loud plop plop plop sound from like 50 yards away; it was very loud. I figured it was a deer and wanting to get a picture of a deer in the water, so I headed that way with camera at the ready. Plop, plop, plop! As I got closer to the swamp the louder the sound got. I was a lookin’ and a lookin’ but still could not see the source. I pushed onward with the trolling motor right into the swamp just as far as I could get the boat. By now the plop plop plop sound was really loud, like whatever it was should be right in front of me but I could see nothing.

I was frantic to see what it was and the only thing I could figure was that whatever was making the sound must be behind the very large cypress tree that was 10 feet in front of the boat. So, I tried to back up with the trolling motor but was now stuck. All the time PLOP PLOP PLOP! I started the outboard to unstick the boat so I could get around in a better position to see behind the tree. I figured the deer would run so I had the camera booted up ready to go. I threw the motor in reverse and gunned it, the boat became unstuck and I wheeled around the side of the tree. NOTHING WAS THERE.

The sound was gone, the water was not disturbed in the swamp and there were no bubbles. I even looked up in the trees! I sat there for 20 minutes just looking and trying to make sense of what happened. About that time a pack of deer hounds that was hollerin’ came down to the swamp’s edge about 200 yards away, then stopped hollerin, sauntered around and then moseyed on. So, I don’t know what was going on. I have listened to many a deer walking through the swamp, this kinda sounded like that, but not exactly either.

The dog thing makes me think they chased a deer into the swamp, but where was it? I just don’t know what it was that I didn’t witness that day. The only thing I can think of is I guess we now have the mysterious legend of the Nottoway Ghost Deer on one of the two Rivers we call the Nottoway and Blackwater.