Looking Back: The Franklin Theatre may be forced to close 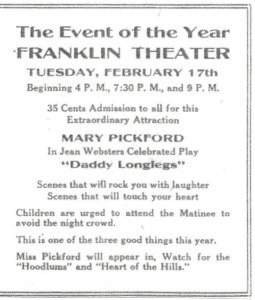 Franklin people are dismayed at the announcement that the Franklin Theatre may be closed, for the winter months, due to the fact that the old and inadequate building, located on the southeastern corner of Main Street and Third Avenue, is not heated. Ever since the cold weather set in, there has been a noticeable falling-off in attendance at Franklin’s popular moving picture house. Mr. M.H. Eppstein, owner, has been looking for temporary quarters that could be comfortably heated — for the winter But, so far, he has been unsuccessful.

At this time, Mr. Eppstein’s Franklin Amusement Corp. has under construction a new and modern theater, of brick construction, [also] to be called the Franklin Theatre, at the northeastern corner of Main Street and Fourth Avenue — facing Fourth Avenue. He is hoping that it will be open in the spring. It will be heated.

In the meantime, Mr. Eppstein needs to find a place to show his shows.

For a while, the Fourth Avenue Armory Hall was being considered as a temporary place to put on the shows. But, according to Mr. Eppstein, although doing everything humanly possible to adequately heat the Armory, he has found it impossible to make it comfortable in severe weather. Therefore, unless he can find a suitable place to show his picture shows, he may be forced to close-up for the winter rather than operate the house as a losing proposition and expect his patrons to be uncomfortable while they are at the movies.

However, every effort is still being made by Mr. Eppstein and a number of his friends to find temporary quarters until the NEW Franklin Theatre building is completed; but, if nothing opens-up in the way of a suitable place to run during the winter months, the Franklin Theatre will close on Dec. 1 — until Spring.

Some local people, who are patrons of moving picture houses located in other towns, have not formed the habit of attending the splendid productions put on by Mr. Eppstein here in Franklin. It is known by his many enthusiastic patrons and friends in Franklin, and this entire section, that his pictures are unequalled anywhere and that the class of his productions is fully up to those shown in the largest moving picture film houses in leading American cities. It is recalled by this newspaper that some of the special Friday night classics Mr. Eppstein has produced here were shown in Franklin previous to their bookings in Norfolk, Richmond and Washington. His pictures have been of an exceptionally high order — clean, wholesome, educational and amusing. From his very first week in Franklin, Mr. Eppstein has not shown those salacious and suggestive sex plays that are all too abundant on most other screens; and, thankfully, he has eliminated that particularly obnoxious brand of hair-raising and impossible melodramas, in serial form, that have such bad influences on the young.

Sol Rawls comes to the rescue

We are glad to announce that the Franklin Theatre, which was faced with the almost certain prospect of having to close its doors for the winter months, will be reopened tomorrow (Saturday, Dec. 4 — in the Fourth Avenue Armory Hall. The Franklin Theatre building, which is located on the southeastern corner of Main Street and Third Avenue, does not have a heating system. Earlier, temporary use of the Armory Hall was being considered as a place for Mr. M.H. Eppstein to show his moving picture shows. But, it was determined, then, that that building, also, could not be adequately heated.

But now Mr. Sol W. Rawls has come to the rescue! He is supplying steam from his own heating plant at Rawls Garage and has made connections to heat the Armory Hall. Rawls Garage is located right next door to the Armory. Coordinating with Mr. Rawls are Mr. James L. Camp and the Norfleet Motor Company; they have provided radiators and piping to connect the Armory with the Rawls steam plant. This is a temporary system — until next spring, when it is hoped that the NEW Franklin Theatre, just down East Fourth Avenue from the Armory, will be approaching completion. It will be heated.

Mr. Eppstein has for the attraction Saturday, matinee and night, a six-reel super production, featuring Taylor Holmes in “Nothing but the Truth,” besides an unusually good “Snub” Pollard comedy.

Mr. Epstein is planning for some of the very best and biggest film attractions he has ever shown, and there is no reason why an enlarged and appreciative patronage from the public of town and community should not justify his untiring efforts to give us the best in moving pictures.

As a special attraction next Wednesday, Dec. 8, matinee and night, Mr. Eppstein has announced the coming of the famous “Victor” band, the organization which makes band records for RCA-Victor — the “Victrola” record machine people. Several superior vaudeville acts will also appear here on that date. Also, on Dec. 8, Mr. Eppstein has arranged for a special children’s matinee at 3:30 o’clock — at greatly reduced prices.

[Note: The Rawls Garage was located on Fourth Avenue where the present-day Franklin Collision Center is located — in the same building. The Fourth Avenue Armory Hall was situated on the spot where the present-day parking lot next to Franklin Collision Center is located. The ORIGINAL Franklin Theatre location is now a grassy vacant lot at Main Street and Third Avenue. The NEW (in 1921) Franklin Theatre was located on the northeastern corner of Main Street and Fourth Avenue where the Franklin Redevelopment and Housing Authority building is now located.]

By Nathan Decker “We have become his poetry, a re-created people.” Ephesians 2:10a The Passion Translation You know it when... read more