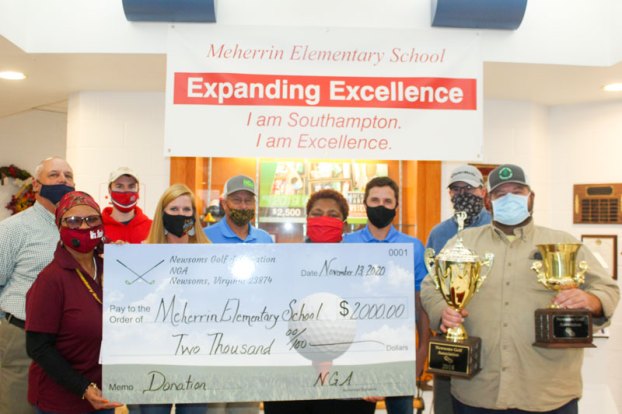 Meherrin Elementary School is the recipient of the Newsoms Golf Association’s generosity this year. On Nov. 13, six NGA members brought a $2,000 check to the school, which was presented to Principal Susan Fowler. In accepting the gift, she was accompanied by Sharon Davis, a fifth grade teacher, and Barbara Blowe, a first grade teacher.

Fowler said that when the Meherrin Eagles finally get to return to the classrooms, there’ll be supplies waiting at their work stations bought with the contribution. She added that if there’s money left over, that will be used to buy gym equipment recommended by Coach Eric Benton.

Making donations to the Newsoms community is a regular part of the NGA’s largesse. Pete Fowler, a member, said the organization has given a total of $5,700. In the 2018, the Newsoms Athletic Association received $1,700, which was used to buy a set of stadium bleachers. Last year, $2,000 was presented to the NAA for the same purpose.

Fowler, who initially helped start the NGA, has said in the past that money comes from tournament fees, auction items and that each player donates about $10 per tournament.

The NGA members played at the following courses; winners are listed parenthetically:

Dunn, it should be added, is the overall champion for 2020. He said he’s been playing for about 10 years. In addition to having golfed in high school, he took the game back up about five years ago. The recent competition, said Dunn, was “really tight” and that he had some luck on his side in winning the championship.

Top 3 Low Rounds at each course: