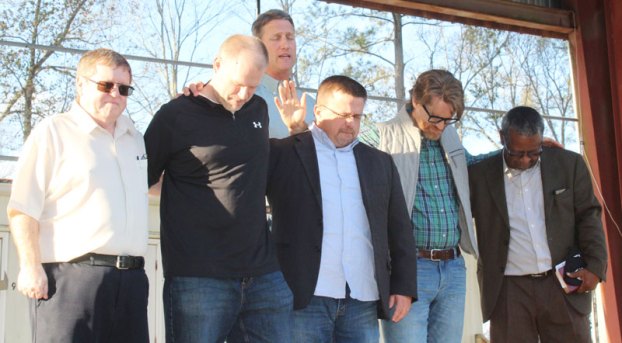 In back, Evangelist Jonathan Lotz prays over five local pastors before delivering his message at the revival service on Sunday. From left are Bill McCarron, Drew Page, Matt Kidd, John-Paul Lotz and Albert Evans. The event took place at the Franklin Southampton Fairgrounds in Courtland. -- Stephen H. Cowles | The Tidewater News 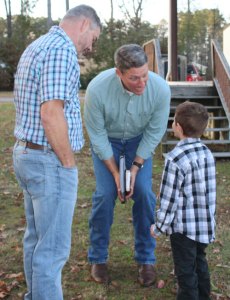 Jonathan Lotz, center, talks to Joshua Walker of Courtland after the service. At left is the boy’s father, Ashley Walker. — Stephen H. Cowles | The Tidewater News

All who attended the revival at the Franklin-Southampton Fairgrounds in Courtland were treated to the unexpected gift of cool, but clearing skies on Sunday afternoon. Another present offered to them was that of eternal life through acknowledging Jesus Christ as their personal savior.

Jonathan Lotz, an evangelist from Raleigh, North Carolina, called on the scores of visitors to accept what he called the “abundant availability of God’s free mercy.”

Referencing the story of the blind man in Luke 18:35-38, Lotz points out how the beggar learns that Christ is approaching, “And he cried, saying, Jesus, thou son of David, have mercy on me.” The story goes on to tell that even after nearby people told the blind man to be quiet, he insisted on the mercy of Jesus, who then healed him. “Receive thy sight: thy faith hath saved thee.” (Luke 18:42)

Lotz pointed out, “When you seek mercy, expect opposition.” Then he related a personal story about being an 8-year-old boy watching on TV his grandfather, the renowned evangelist Billy Graham. At the time, though, he was not in a mood for such preaching. Later, though, he got to thinking about it, and decided to pray for Jesus to come into his life.

“Do you know Christ personally? Admit you have a need,” said Lotz, who added that he looks forward to the day when they meet in the afterlife. 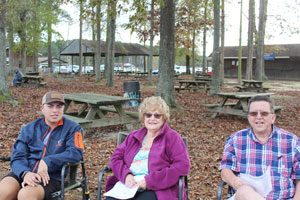 Residents who attended the service brought their own lawn chairs or blankets. — Stephen H. Cowles | The Tidewater News

The event was hosted by Courtland Baptist Church (CBC). The pastor, the Rev. Dr. John-Paul Lotz, a cousin to the speaker, had recently told The Tidewater News that the revival was organized as a way to bring hope to people.

“What do we hope for in times of crisis,” asked the host pastor, referring to the COVID-19 pandemic, political, financial and social turmoil in this country and the world. He added that getting through such seemingly insurmountable challenges “takes something bigger than yourself.”

After his sermon, Lotz joined his cousin and other guest pastors on the ground beside the stage. They invited anyone to come up and accept Jesus into their lives. The visiting clergy were: the Rev. Bill McCarron, assistant pastor at CBC; the Rev. Drew Page, now interim pastor at Bethlehem UCC in Suffolk; Pastor Matt Kidd of Kingdom Impact; and the Rev. Albert Evans of Community Fellowship Church of Deliverance.

By Charles Qualls As you read this, my wife and I are newly returned from a working trip down to... read more