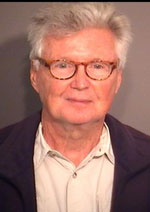 A Franklin man has been arrested on several charges related to child pornography.

Acting on information received from the Virginia Internet Crimes Against Children Task Force, members of the Franklin Police Department initiated an investigation on Charles Greer Gatten, a 66-year-old resident of the city.

Sgt. Scott Halverson, department spokesman, said that the suspect is being held with no bond at the Western Tidewater Regional Jail.

The Tidewater News will update this story as it develops.

Between 2 and 3.5 inches of rain have fallen during the past several hours, and another 1 to 2 inches... read more