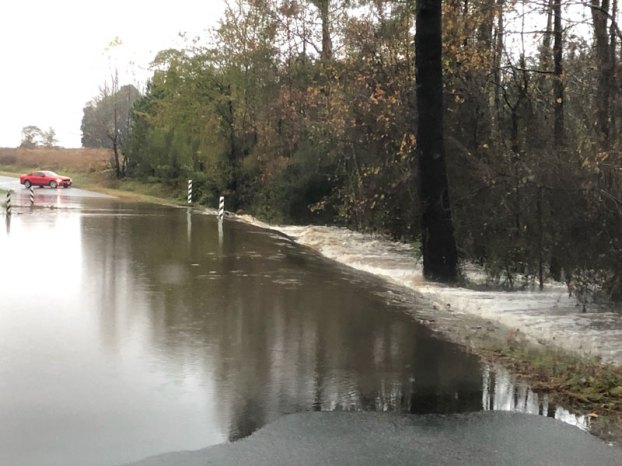 A car begins to make the turnaround on this stretch of Drake Road coming from Sedley to Blackwater Road. People are being advised not to attempt to cross flooded areas such as this one. -- Mitzi Lusk | The Tidewater News 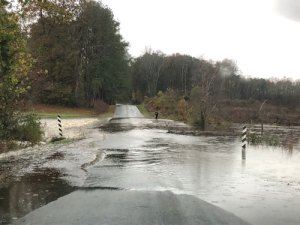 Between 2 and 3.5 inches of rain have fallen during the past several hours, and another 1 to 2 inches are possible in the next hour or so. — Mitzi Lusk | The Tidewater News

The National Weather Service (NWS) in Wakefield continues to urge residents in Western Tidewater, the Greater Hampton Roads region and Northeastern North Carolina to stay off the roads for the duration of the flash flood warning, which has been extended to 6 p.m.

The NWS website stated that at 12:06 p.m., trained weather spotters reported numerous road closures in the warned area. Flooding is already occurring. Between 3 and 5 inches of rain have fallen. While the heaviest rain has ended, the threat for flooding will continue for at least the next several hours. Additional rainfall amounts of 0.5 to 1.5 inches are possible through late afternoon.

Flash flooding can include small creeks and streams, urban areas, highways, streets and underpasses as well as other drainage and low lying areas.

Sgt. Scott Halverson, spokesman for the Franklin Police Department, said that as of 9:50 a.m., there had been no reports of any flooding or vehicles being stuck in the water in the city.

There had already been a report of flooding on Drake Road coming from Sedley to Blackwater Road in Southampton County.

Windsor Police Chief R.D. Riddle stated the town has been experienced flooding in the normal areas around town, but so far the department has not had to rescue any stranded motorists.

As of 12:15 p.m., “we have been and are experiencing some moderate flooding on roadways in the south and central parts of the county,” said Isle of Wight Sheriff’s Office Capt. Tommy Potter. “Route 460 was shut down for a period of time as the waters covered the roadway near the intersection of Route 460 and Yellow Hammer Road. We have additional secondary roadways that are impassable due to flooding and we will continue to monitor those roadways throughout the day.”

Just after 11:15 a.m., Isle of Wight County Schools announced that all classes will be dismissed one hour early today due to standing water on roadways. The early dismissal “will allow buses to deliver students home prior to sunset which enhances visibility for our drivers,” school system spokeswoman Lynn Briggs said in the statement.

In addition, the Isle of Wight School Board meeting scheduled for tonight at Georgie D. Tyler Middle School in Windsor is canceled. The meeting will be rescheduled later this month on a date to be announced.

Residents who must drive are advised by the NWS to turn around when they encounter flooded roads. Most flood deaths occur in vehicles.

Further, if you are in the warned area move to higher ground immediately.

Residents living along streams and creeks should take immediate precautions to protect life and property.

If you know of flooding in your area, or have photographs, please send them to Editor@TheTidewaterNews.com or post on our Facebook page.

The Tidewater News will provide updates as this situation develops.

NATE DELESLINE of the Smithfield Times contributed to this story.

IVOR An Ivor man is reported dead after the car in which he was a passenger overturned on Tuesday afternoon.... read more