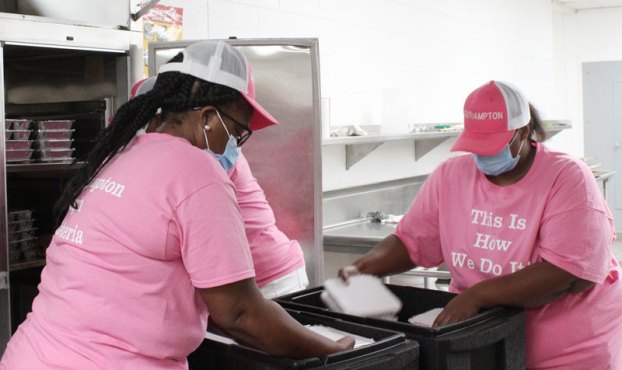 Placing the meals in crates are, from left to right, cafeteria manager Silvie Worrell-Murphy and Jaquetta Dotson. Elaine Barnes-Murphy reaches in to get more trays. -- Stephen H. Cowles | The Tidewater News

They fuel learning through food 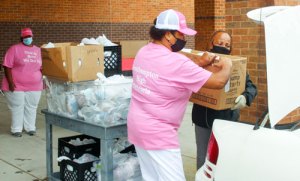 By 6:30 a.m. each Monday through Friday, Southampton High School Cafeteria Manager Silvie Worrell-Murphy is in the school kitchen. Her crew comes in within the next half-hour, and they begin the work of mixing, stirring, baking, cooking and then packaging 250 lunches; there’s also the matter of providing 250 breakfasts as well.

This has been the norm since the school year resumed in September, albeit virtually because of the continued presence of the novel coronavirus. Because of it, Virginia schools were initially shut down for a couple of weeks this past spring by order of Gov. Ralph Northam. Ultimately, buildings stayed closed for in-person learning, and the remote teaching methods were established. Locally, though, the decision was made to continue the feeding of students with a host of safety precautions put in place.

The school board made the decision this past summer to resume this style of learning as the COVID-19 pandemic had not sufficiently abated.

“There wasn’t really a schedule change,” Worrell-Murphy said, adding that she and the four other women — Elaine Barnes-Murphy, Jaquetta Dotson, acting assistant manager Gevonia Freeman and Viola Worrell — were already coming in at the same hour. Only the packaging of the meals was the biggest change for them.

The manager mentioned that she’s been at Southampton High School for 27 years. She began as a substitute teacher.

“I heard there was a position coming up for assistant manager and I applied,” said Worrell-Murphy. “When the manager Phyllis Turner retired, she recommended me.”

During the recent interview on a Monday morning, she said next week’s menu was already established; they go from Wednesday to Wednesday. That particular week, chicken tortillas and black beans had been prepared.

Barnes-Murphy, who also drives a bus to deliver meals, said she and others get positive feedback from both parents and students.

“They say good how the meals are,” she noted.

When everything is packed and loaded onto carts, they’ll wheel them through the commons area where students would otherwise be dining, then down a hallway and onto a loading platform. Bus and car drivers will back up and take hold of the boxes for their routes, and quickly be on their way.

The quartet leaves about 2 p.m., and the manager is usually out the door 30 minutes later.

“I really enjoy doing this for the community and the children,” said Worrell-Murphy.