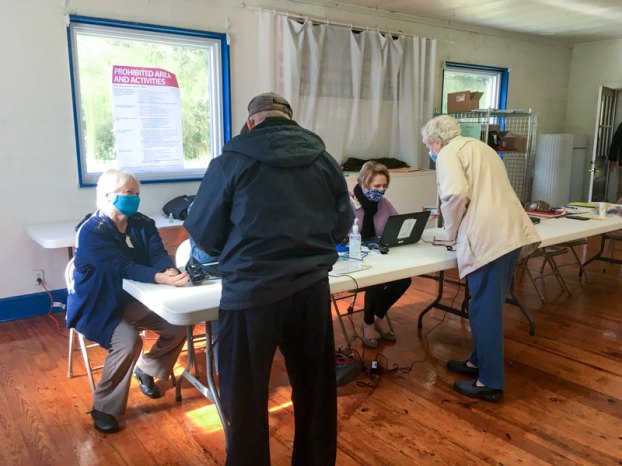 Joanne Dixon, left, talks with a voter. Beside her, not pictured, is David Scott. Next to them, Jennie Tillman assists another voter. -- Stephen H. Cowles | The Tidewater News

Turnout was strong in southern IOW

Joel Bradshaw of Carrsville is certain that Donald Trump will be re-elected, in part because the country “needs a strong president.”

Voters confident in their choices

By 6 a.m. Tuesday when the polls opened, just under half of Isle of Wight County’s registered voters had already cast their ballots.

According to Voter Registrar Lisa Betterton, 9,838 voted early in-person in the days leading up to the Nov. 3 election, and another 3,607 had voted by mail. But the mail-in ballot count could still go up, as Virginia election law allows absentee votes to be counted through noon this Friday, so long as ballots are postmarked by Nov. 3.

The 13,445 county residents who voted early this year account for roughly 63% of Isle of Wight’s 21,075 total votes cast during the 2016 presidential election. And according to poll workers, in-person turnout is at a record high as well.

Stella Bradshaw, chief of the polling site in the Carrsville Ruritan Clubhouse, was thrilled on Tuesday morning as voters filed in to cast their ballots.

“We’ve had more people in the first hours than we’ve ever had before,” said Bradshaw. She’s been working at the polls for at least 20 years.

Outside, Billy Hall handed out flyers encouraging people to vote for Kathy Torrence, one of two candidates for the Isle of Wight Clerk of Court. Jaime Mumford has been her rival for the position. Hall, a retired sheriff’s deputy of 26 years, is confident that who he chose on the ballot will be victorious.

“Yes, I would not have voted for them if I didn’t think they’d win,” he said.

Another person who’s certain about his candidate picks is Joel Bradshaw, and his ball cap let everyone know he’s ready for Donald Trump to be re-elected.

“Absolutely, he’s the right choice! He’s business-oriented,” said the voter, who owns Bradshaws Country Store a short distance down the road. “He’s also draining the swamp that is Washington, D.C.”

Bradshaw, who’s traveled across the country and around the world in his career, said he’s witnessed foreign countries have been taking advantage of the United States financially, and that Trump, with his own global business experience, is working to stop it.

Bradshaw acknowledged that the first debate between the presidential candidates didn’t go well.

Further, Bradshaw said he doesn’t like the way the president talks to people sometimes, but “Trump listens to people and makes his decisions.” 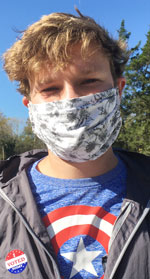 Phillip Carr of Walters said he votes for the person he feels is the best candidate.

Outside the Walters Ruritan Club House was Phillip Carr, who said he is not really confident about his choices.

“I vote for who I feel is the best candidate,” said Carr, voting for the second time. He complimented the poll workers inside for their helpfulness.

“They made it pretty easy,” he said.

Rachel Rhodes said she wasn’t sure about her candidates, but Nettie Stephenson quickly said, “I’m sure!”

Inside, poll chief Chandra Christmas said turnout has been “above normal. They [the voters] were waiting to come in for a little bit. I’ve not seen it this busy before. There were a lot of absentee and early voting, which is very unusual.”

Christmas said she anticipated a steady flow through the day. Within moments, several more people got in line to cast their ballots.

Back outside, Theresa Posey, a petty officer first class in the Navy, said after voting that she’s comfortable with her picks. She chose to show up in person.

“I saw my vote scanned. I have no worried about it getting lost … and it’s my right.”

Further north in the county, 567 voters had cast their ballots at FIrst Gravel Baptist Church in Rushmere as of early Tuesday afternoon. Another 456 had cast votes at the Windsor Town Center, and an additional 218 had voted at the Isle of Wight Ruritan Clubhouse across the street from the county’s courthouse complex. Poll workers at First Gravel Hill and the Windsor Town Center reported being very busy early Tuesday morning, but settling into a steady pace later on.

Teaja Wilkins, 19, of Smithfield, cast her ballot at First Gravel Hill for the first time in her life.

STEPHEN FALESKI/STAFF WRITER Stephen.Faleski@TheTidewaterNews.com FRANKLIN “Super busy” is how Raquel Jones described the turnout of voters at the poll in... read more