FSEDI, DFA program gets the gold 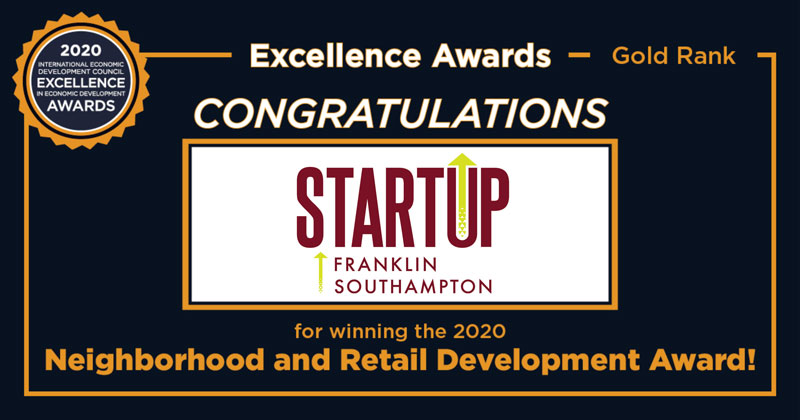 STARTUP Franklin Southampton won a gold category award for the Neighborhood and Retail Development category of the 2020 Excellence in Economic Development Awards Program. The honor was presented recently at an awards ceremony during the IEDC Annual Conference.

“We are honored to be accepting this internationally-recognized award in conjunction with the Downtown Franklin Association,” FSEDI Board Chairman Harrell Turner said. “Investing in the entrepreneurial advancements of our community is one of our organizational pillars, and co-managing this program with the Downtown Franklin Association has helped us further that strategic goal.”

STARTUP Downtown Franklin was formed in 2017 after the Downtown Franklin Association received a Community Business Launch grant award from the Virginia Department of Housing and Community Development. The program was administered by FSEDI and the DFA. The program can be broken down into four steps: Apply, Learn, Pitch, Win. Potential business owners apply to participate in the competition; they must attend six business classes taught by local professors and business stakeholders; they must submit a business plan and conduct a business pitch to a panel of judges; then three winners are announced based on the business plan and pitch scores.

The grand prize winner receives $20,000, the runner-up is awarded $10,000, and third place is given $8,000. All prize monies are administered as a reimbursable grant. Three iterations of the program were completed, with eight new businesses open and operating in Downtown Franklin and one in Southampton County.

IEDC’s awards program is intended to recognize the world’s best economic development programs and partnerships, marketing material, and the year’s most influential leaders. Thirty-five award categories honor organizations and individuals for their efforts in creating positive change in urban, suburban and rural communities. Awards are judged by a diverse panel of economic and community developers from around the world, following a nomination process held earlier this year. IEDC received over 500 submissions from four countries.

“The winners of IEDC’s Excellence in Economic Development awards represent the very best of economic development and exemplify the ingenuity, integrity, and leadership that our profession strives for each and every day”, said 2020 IEDC Board Chair and One Columbus CEO Kenny McDonald. “We’re honored to recognize the more than 100 communities whose marketing campaigns, projects and partnerships have measurably improved regional quality of life.”

Note: This version corrects the headline to include the Downtown Franklin Association.