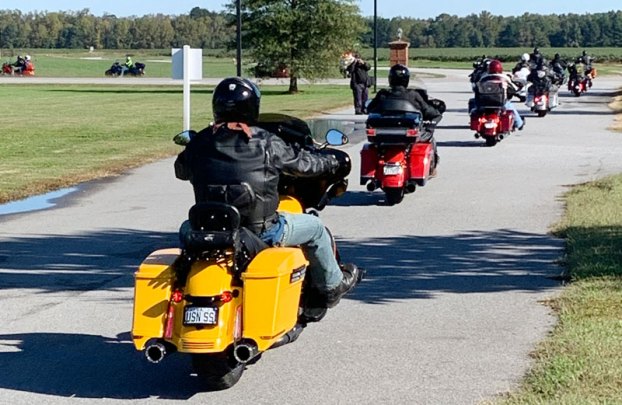 Bikers roll out from High Street United Methodist Church to ride through Surry and finish at Fred's in Franklin. They participated in the recent 14th annual Robert A. Hill Sr. Toy Ride. -- Submitted | Richard Walker 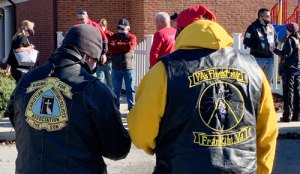 Many bikers identified to which motorcycle club they belonged on their jackets. — Submitted | Richard Walker

The public has again responded to the call for donations of new toys and money with which to buy them. On the morning of Oct. 17, many participants turned out for the 14th annual Robert A. Hill Sr. Toy Ride, which is sponsored by the Fraternal Order of Police No. 56. 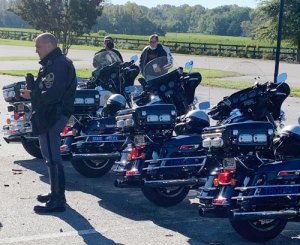 Virginia State Troopers were among the escorts of the bikers who rode in the Robert A. Hill Sr. Toy Ride on Oct. 17. — Submitted | Richard Walker

“We had about 43 motorcycles and 53 people participating. There were six state police motor escorts, an Isle of Wight motor escort and two regular troopers,” said Richard Walker, lodge president.

The ride began at High Street United Methodist Church, stopped midway in Surry County and ended with lunch provided at at Fred’s in Franklin.

Walker continued, “So far we’ve around 50 toys and $975 in cash raised.“We had a silent auction for several items, and in the 50/50 raffle, the woman who won donated money back to the toy fund.”

he added the local bar association and area businesses have also contributed.

“We much appreciate that. It’s all been great,” said Walker. “I think the community’s really stepping up.”

Donations of checks or money orders are still being accepted at Sonabank in Courtland or the Franklin Police Department up to Wednesday, Dec. 23.

The FOP lodge on Main Street will be open Dec. 22-24 for parents to shop for children.

Because of the COVID-19 pandemic, he said, people are “more in need than ever before” when it comes to Christmas.

For more information about donating money or new unwrapped toys, or the shopping, contact Walker at either 757-617-1052 or walkerra1@live.com.

Branchville native impresses on ‘The Voice’

Sid Kingsley wants to be as creative as possible BRANCHVILLE Sid Kingsley didn’t suddenly become nervous when he auditioned for... read more