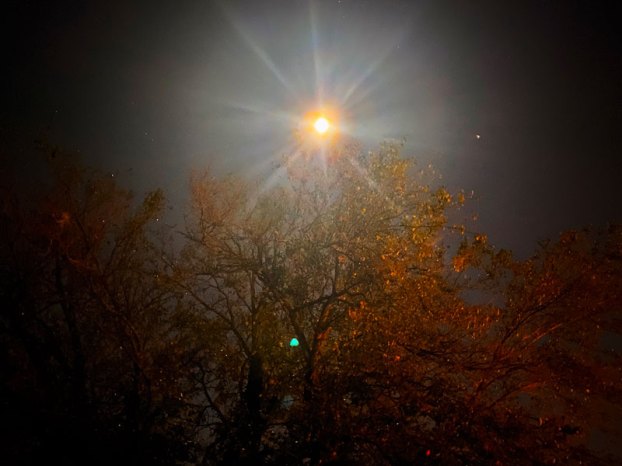 The blue moon on Halloween is a rare event. -- Courtesy | VCU CNS Photo

Halloween’s blue moon is rare, perfect for the moment

This year has brought a pandemic, major election and now a rare, blue moon on Halloween.

A blue moon is the second full moon in a calendar month and appears every 2.5 years, according to NASA. A full moon occurs on Halloween every 19 years. A Halloween full moon hasn’t appeared in all time zones since 1944, states the Farmer’s Almanac.

The blue moon isn’t blue; the term refers to the moon’s timing, not color, NASA said. The blue moon is also known as the hunter’s moon because it provided enough light for hunters to gather food.

Kali Fillhart, a tarot reader and astrologist, said in a Facebook message that the astrology of 2020 is more “wonky” than just a blue moon on Halloween. There is also a Mercury retrograde that ends on Election Day and a Mars retrograde that ends on Nov. 13. A retrograde describes how a planet can sometimes appear to be traveling backward through the sky, states the Farmer’s Almanac. A Mercury retrograde has a common cultural association with anxiety around miscommunication and blunders.

“All that to say, astrologers have been talking about the astrology of 2020 for years,” Fillhart said. “We knew it was going to be intense.”

She also said this full blue moon could bring “unwanted reactions” for people, especially since Halloween is a time when “spiritual veils fall.”

Halloween traces back to the Celtric tradition of Samhain, a festival to celebrate harvest and usher in the coming darker months. The Celts believed the “veil” between the living and the dead was at its thinnest around this time, and they celebrated their deceased ancestors, a tradition also seen in Dia de los Muertos.

Adding to the alignment of a blue moon, Halloween and astrological events, will be Daylight Saving Time on Sunday, when many Americans set their clocks back an hour and it’s darker out earlier.

While October may have started and ended with a bright, full moon, many Americans have anxiety around the upcoming election and facing winter in a pandemic. The share of voters who expect it will be difficult to vote has more than tripled since 2018, according to the Pew Research Center. Eighty-three percent of voters said this election matters. Fifty percent of voters shared that sentiment in 2000. One in three Americans reported psychological distress during extended periods of social distancing, Pew reported in May.

Kashaf Ali, a marketing communications and analytics major at Virginia Commonwealth University in Richmond, said in an email that Halloween won’t be any different for her this year, but she acknowledged that the blue moon feels ominous.

“I’ve been social distancing since March and I doubt it’ll be any different this weekend for me,”Ali said. “It’s definitely something to think about how everything’s happening so close together.”

Deneen Tyler, a spiritual wellness practitioner in Richmond, said that the people will be dealing with the energy the blue moon brings this Halloween.

“Full moons are a time of completion,” Tyler said. “It’s a time of releasing, letting go, making peace, honoring what we’ve been through, and saying goodbye in order to close that chapter and let in something new.”

Tyler said that this full blue moon will be in the astrological sign of Taurus on Halloween, and that many people might be wrestling with saying goodbye to different habits and routines, and that could apply to Election Day.

“We’re all collectively dealing with the change, hence the election, the change in the authority of our society,” Tyler said. “We’re resisting change and these alignments are really showing us where we need to release the resistance.”

Fillhart also believes that this Halloween is a time of change and personal reflection.

What does our dark side look like?” she said. “Halloween is all about confronting monsters. What monsters are we constantly fighting everyday?”

While the moon will be in Taurus on Halloween, it will be in Gemini on the night of the election, opening up new possibilities. Tyler said that, depending on the choices individuals make in dealing with the outcome of the election, people could feel “very confused” or “very inspired.” Ultimately she said people will have to choose how to direct that emotion.

The last blue moon on Halloween in all time zones ushered in the victory of a blue candidate. Incumbent Democratic President Franklin D. Roosevelt defeated Republican Thomas E. Dewey, going on to win a historic fourth term in the 1944 election.

Tyler said that unlike astronomy that people can witness, astrology occurs within. Different factors pertaining to celestial bodies can influence people in different ways, but individuals have to choose how they react and “the seeds they plant” on their own.

Virtual school not a money saver