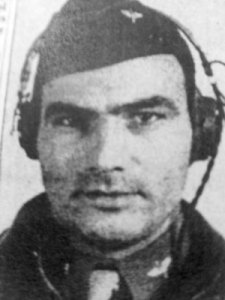 Lt. Elliott K. Whitfield had been reported missing since Sept. 4, 1945. The B-29 bomber plane was later found crashed at Mt. Nagasaki in Japan. — Submitted

Lieutenant Elliott K. Whitfield, bombardier on a B-29 bomber plane — based on Saipan, has been missing since Sept. 4. His plane failed to return to its home field. Bombardier Whitfield and his 11-man aviator crew were engaged in missions of mercy: dropping packages of food and other necessities to prisoners of war in Japan. His brother Marion Whitfield was notified on Oct. 12 by the U.S. War Department that the bomber and its crew were missing; and nothing has been heard from them since that time. Much concern is felt here by his family and many friends.

Lt. Whitfield, a son of Charles F. Whitfield and the late Mrs. Whitfield, entered the armed forces of our country in March of 1942, undergoing extensive training as an aviator in several fields in Texas and the southwest. Leaving the United States in July of 1945, he landed in Saipan on July 30, 1945. It is entirely probable that if the bomber in which the crew was riding when last heard from, crashed, either on land or sea, they may be safe; but, on account of the great distances in the Pacific and the lack of means of communication, it might be some time before Lt. Whitfield could have made contact with American forces, or any other friendly force. There have been numerous instances in which aviators have been missing for many months in the Pacific, even given up for lost, and have returned safe and well to their people. It is certainly the hope of everyone that such may be the case in this instance, and that a very fine young man, who is generally liked here, may be found and returned safely to his own family.

(NOTE: In December of 1945, the family was notified that the plane had actually crashed — on Sept. 4, 1945 — at Mount Nagasaki, Japan and that Lt. Whitfield had perished in the crash. One man did survive. At that time, Lt. Whitfield’s surviving family was: father, Charles F. Whitfield; brothers, Marion and Franklin Whitfield; and sister, Mrs. James C. Story of Newsoms. His mother had died on Sept. 21, 1945.)

Corporal Raymond Holland, who has been in Avon, Connecticut. for rehabilitation training has completed his training and was given an honorable discharge on Sept. 27. His wife, Virginia, and little sister Gloria met him in Washington where they spent a week with his aunts, Mrs. S.J. Benton and Mrs. G.V. Hayes. They have returned to the home of his aunt, Mrs. John Beaton, in Franklin where he made his home before entering service on May 4, 1943.

Corporal Holland lost his vision as a result of a land mine explosion in Lambach, France, on Dec. 21, 1944. During his 12 months overseas, he was a construction foreman. He was awarded several medals, including European, African, Middle Eastern ribbons with 3 battle stars. He also was awarded the “Purple Heart” and the “Good Conduct Medal.”

Captain Sol W. Rawls Jr., of Franklin, has been assigned to the position of “Aide-de-Camp” to Major General William E. Sledd, commanding general of the Ninth Service Command at Fort Douglas, Utah. Since 1942, the Ninth Service Command at Fort Douglas has functioned as the west coast operations center for vehicle and equipment repair and has been the temporary finance center for the U. S. Army. The young Captain Rawls, son of Mr. and Mrs. Sol W. Rawls Sr., was assigned to NSC Headquarters in May of 1944. Prior to being called to active duty, he was associated with his father’s business enterprises here in Franklin. Captain Rawls, a graduate of Virginia Military Institute, lives at 74 S. Wilcott St., Salt Lake City, Utah, with his wife. the former Ann Rawls of Henderson, North Carolina.

The Court of Honor for the Boy Scouts of the Old Dominion Area Council, Eastern District of Virginia, was held at Courtland Baptist Church on Monday night. The Rev. Ernest W. Aaron, pastor of High Street United Methodist Church presided. S.V. Camp Jr. led the court in the pledge of allegiance to the flag. Scout Lewis Davis Jr. attended the candelabrum, while Jimmie Woodard of Courtland served as Clerk of Court. The court was opened with the “National Anthem” — played by Edwin Priggen.

Scouts Vaughan Fowler and Mac Coker were recognized as qualifying for the “Eagle Scout” rank: Their badges will be presented at the next Court of Honor.

The Rev. Aaron presented to William Rhodes the “Bronze Palm” award, which is given when an Eagle Scout earns five merit badges over and above the number required for the “Eagle Scout” qualification. It is to be attached to his “Eagle Scout” badge.

The court was closed with the singing of “My Country ‘Tis of Thee” by the audience.

By Nathan Decker Do you remember the day you realized your hero was human? For me, it was when Michael... read more