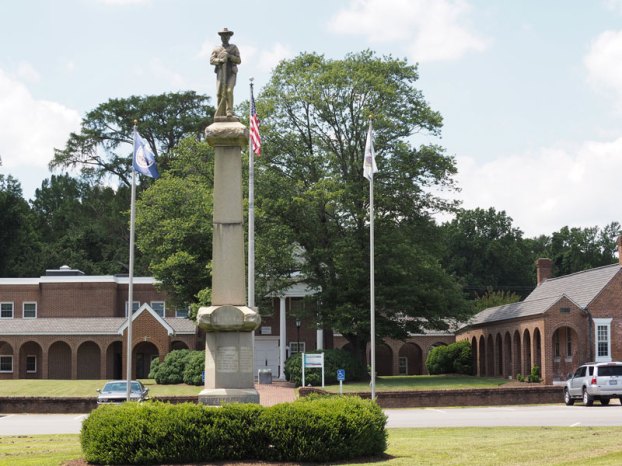 Isle of Wight County’s Confederate monument, erected in 1905 outside what was then the county’s courthouse. -- File Photo

Isle of Wight’s monument task force, on Oct. 21, ranked Windsor’s municipal cemetery as its front-runner choice of seven potential sites on which to relocate the county’s Confederate statue.

Moving the statue to the village of Walters on land currently owned by task force member Volpe Boykin is the group’s second choice. Boykin said he would be willing to grant an easement to any organization willing to maintain the monument in perpetuity.

“I’ve already talked to the major neighbors; they don’t care,” Boykin said. His only caveat was that the organization be one likely to “continue to exist.”

Relocating the monument to county-owned land by a water tower near the county’s courthouse or to Fort Boykin — a Civil War-era fort now operated as a public park and beach — are in third and fourth place, respectively.

Task force member Herb De Groft’s suggestion of moving the monument to town-owned land in downtown Smithfield to commemorate a Civil War skirmish fought along Main Street Jan. 31-Feb. 1, 1864, finished fifth. Moving it to Fort Huger, another Civil War-era fort turned park, finished sixth. In last place is donating the monument to the Shenandoah Valley Battlefields Foundation, which has offered to re-erect it on a battlefield more than 200 miles away near James Madison University.

“It is a monument to the dead of Isle of Wight County, not Shenandoah,” De Groft said.

All options are only recommendations at this time. Isle of Wight’s Board of Supervisors, which appointed the task force members earlier this month, expects to make a final decision on the monument’s fate some time in December.

With options for relocation seemingly decided, the task force turned its attention to the second mandate the Board of Supervisors had given the group: finding a way to contextualize the monument should it remain in front of the county’s government complex, where it’s stood for 115 years.

Maggie Richards, who represents Windsor on the task force, renewed a suggestion she made at the group’s previous meeting to erect additional statues outside the county government complex dedicated to Black leaders from the Civil War and Civil Rights eras. Boykin likewise renewed his suggestion that contextualization take the form of a second monument dedicated to the 36th Infantry United States Colored Troops, a regiment composed primarily of former slaves recruited from Union-occupied areas of eastern North Carolina and southeastern Virginia, some of whom were from Isle of Wight County. But that didn’t satisfy the concerns of the Rev. Dr. Lilton Marks, who’s representing the Isle of Wight NAACP on the task force.

“You’re still going to see the other one there … in a spot of honor, a representation of the Confederacy,” Marks said. “What people have gone through … their ancestors were slaves, who were looked at not as human but as property, the lynchings … that’s a big part of the problem right there, what it represents.”

Erecting a monument of “equal size, equal height” to those who died in all wars, is also an option, but “that’s what the Isle of Wight Veterans Memorial on North Church Street is,” De Groft said.

Derek Boone, who’s representing the county’s Newport District on the task force, then asked if it was possible to remove the Confederate soldier figure and verbiage inscribed on the monument, which drew two different answers from Boykin and County Administrator Randy Keaton.

Per the recent changes to state law, localities may remove, relocate, cover or contextualize any monuments they own.

“Contextualization includes altering,” Keaton said, citing a recent legal opinion from County Attorney Bobby Jones. “You can grind off the words on the side and put a plaque there … that would be contextualization.”

“I can call three of the attorneys who are experts in monuments that would tell you that under the code, only what they say is allowed, is allowed; destruction is not allowed,” Boykin countered. “I helped write this. I was up in Richmond arguing in front of committees, working with lobbyists that we pay thousands of dollars to in Richmond when this bill was passed … it started out with the word ‘alter.’ That word was taken out after much fighting.”

Rebecca Mercer, who represents the county’s Hardy District on the task force, then suggested adding one or more plaques or signs, not necessarily attached to the monument.

As for what that signage would say, according to a guidance document from the Virginia Department of Historic Resources, signage contextualizing Confederate monuments that remain on public property in their existing locations should “explain to the public the history of the monument, the motivation for its erection, and the truth regarding the ‘Lost Cause.’”

Dr. Jonathan Leib — a professor of political and cultural geography at Old Dominion University whose expertise includes the politics of memory and representation in the American South, specifically flags and monuments — describes the “Lost Cause” movement of the late 19th and early 20th centuries as a re-envisioning of the Civil War “not so much as a devastating defeat in a war that the south was fighting to preserve the plantation economy and slave society” but rather as a “glorious defense of home and honor against an invading northern army.”

“The thing to always remember about that new south vision is it was white south only,” Leib said. “In the late 19th century as white southerners and the white power leaders of the South regained control they did everything they could, both in law and in practice, to strip African Americans of all rights in the region. So you have this glorious history being promoted, African Americans are losing the right to vote … you had segregationist policies, you have these being enforced both in law but also with violence and vigilante groups. It’s all part and parcel of the same image.”

As for how Confederate monuments fit into Lost Cause ideology, Leib called their erection in prominent, public places like courthouse squares, city intersections and public parks “a concretizing of power.”

“You could literally see white domination on the landscape,” Leib said. “The argument that’s given is that, ‘no no no, this was simply and solely to honor those who had fought for the Confederacy,’ but that takes it out of the historical context.”

The next monument task force meeting will be at 6 p.m. Nov. 12 in the Isle of Wight Rescue Squad Station on Great Spring Road in Smithfield.

Looking Back: Boykins was founded by early-day settlers

By Clyde Parker A good portion of the town that we now know as Boykins was once part of a... read more