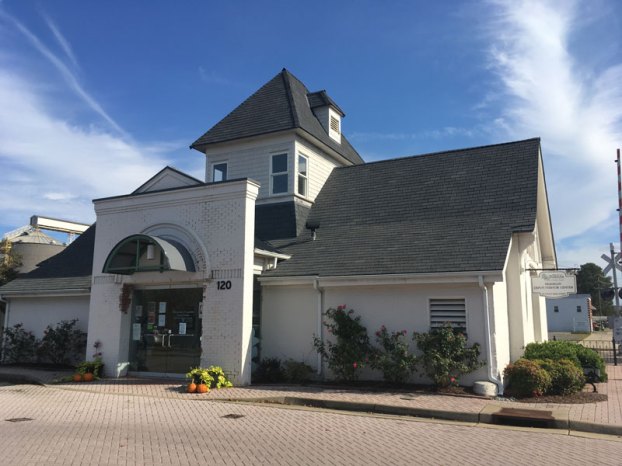 The former train station building, which houses the Downtown Franklin Association, is going to become the city's newly created tourism department. The DFA will be moving its office to the Franklin Business Center sometime before year's end. -- Stephen H. Cowles | The Tidewater News

DFA will move to Business Center

The Downtown Franklin Association will be relocating from its Main Street location in Franklin’s historic train station to an office in the Franklin Business Center on North Mechanic Street.

Ann Ferguson, who had been running the DFA while Executive Director Dan Howe has been on vacation, confirmed the DFA would be leaving the train station building sometime prior to Dec. 31.

Howe said on Tuesday that his last official day of work was on Oct. 8, and that he was had been granted paid leave, but that his retirement doesn’t become official until Dec. 31. He added that he had already announced his plans to retire by that date.

According to City Manager Amanda Jarratt, Franklin is currently hiring for a newly created tourism director position and plans to convert the building into a visitors’ center. This, she said, will help bring Franklin’s tourism efforts in line with the organizational structure of nearby communities such as Smithfield and Suffolk.

The city already owns the train station, and has leased that building for many years to the DFA for no rent as part of its agreement with the DFA to provide the association with office space. The city will continue to honor that agreement, Jarratt confirmed, but instead will be offering space in the business center.

While the city’s plans for the train station hadn’t come up during the open session component of the most recent Franklin City Council meeting on Sept. 28, the council members had gone into closed session that evening to discuss “prospective candidates for employment” and “appointments to boards and commissions,” specifically, the DFA.

Editor’s note: a previously published version of this story had incorrectly stated that Howe had already officially retired, and that the city had already hired a tourism director.

Candidates state their case to serve their communities – II

Local people in Isle of Wight County are seeking offices in various capacities, such as Clerk of Court and Windsor’s... read more